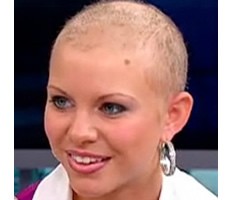 Contrary to perception that baldness is exclusive to men, a doctor at the Eden Family hospital in Accra says women and teenagers are also vulnerable.

Dr. Andre Kwasi Kumah says hair loss or baldness, be it in men, women or teenagers can be attributed to genetics.

He said, the higher the testosterone [male hormone] the faster a man can lose his hair. This, he noted, could lead to increase sexual urge or libido.

“There has been a myth for several years that bald headed men have high libido, and i think that is the reason behind this myth,” Dr Andre said.

The hair, basically, contain a material called Ceratin. It is produced from under the skin and later appears on the scalp as hair. The hair seen on the scalp of every individual is a dead caratin extracts from the skin, Doctor Andre explained.

Explaining the differences in baldness, the doctor said Sacatricia Alopitia is also another form of permanent hair loss caused by inflammation of the scalp, and there is little one can do about this, except through surgical operation, he noted.

Dr. Kumah says temporal hair loss which are caused by nutritional deficiencies, emotional distress, death of a family member among others can be treated.

Hair grow in cycles, Doctor Kumah noted, explaining that typically on the scalp, there are about 100,000 hair strands and about 90% of them grow at any particular period of time for about two or three years and go to a rest stage of about three or four months. “It falls off and then starts growing again.

“But if more hair is getting to a rest stage than it is growing, then it will be noticed that one is losing hair,” he said.

He said hair losers can consult their doctor for the cause of their loss hair.