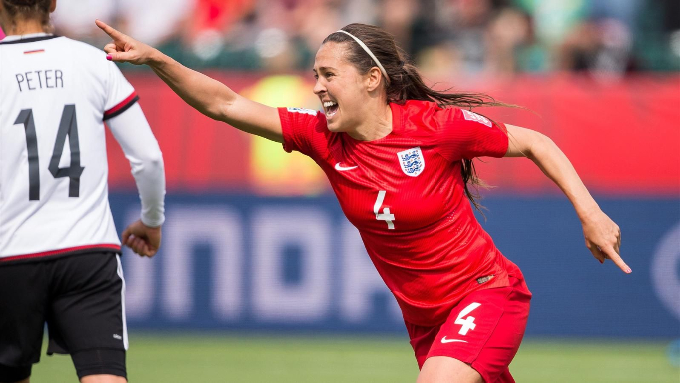 England concluded an historic World Cup campaign by taking the bronze medal after securing a first ever win over Germany thanks to Fara Williams' extra-time penalty in Edmonton.

The Liverpool midfielder showed nerves of steel to step up and coolly send Nadine Angerer the wrong way after Lianne Sanderson had been tugged back in the area by Tabea Kemme. It was the Lionesses first victory in 21 attempts against the Germans and was the perfect way to sign off from a tremendous campaign in Canada.

Mark Sampson's tactical changes have been a feature of England's run throughout the tournament but his decision to switch to an unfamiliar back three almost backfired in the opening 10 minutes as Germany laid siege to the Lionesses goal. Karen Bardsley was forced to deny Lena Petermann and Celia Sasic while Steph Houghton did brilliantly to acrobatically clear off the line after Jo Potter's miscued defensive header looked to be dropping into her own net.

England settled as the half wore on and could have snared the lead against the run of play when Houghton scuffed straight at Angerer from Lucy Bronze's delightful cutback.

Sampson's side turned the screw late on and could have won it in normal time but Jill Scott failed to get her shot away after rounding Angerer. Germany dictated the play in extra-time but it was England who got the breakthrough before clinging on as Bianca Schmidt missed a simple header at the death.