Worlafest 2020: When a coffin gives life to a tormentuous year 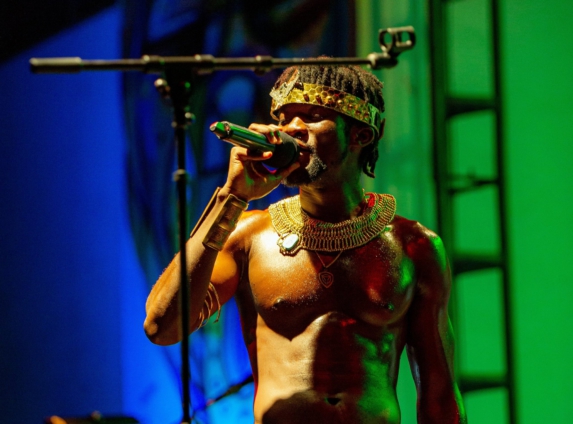 One has to die in order to be afforded the opportunity of rebirth, an indication of a fresh start into a realm of greater things to come. This was Worlasi’s justification for yet another enthralling entrance on Saturday.

We’re still waiting for a day when the versatile artiste, born Raphael Worlasi Langani, will walk onto a stage like every other ‘normal’ musical performer would do.

Imagine being ushered into the venue in an enclosed microphone-shaped casket by traditional pall bearers chanting in a dark ambience to the awe of a dazzled crowd at Worlafest 2020.

This is the prop that set the tone for a night that turned out to be nothing short of electrifying performance backed by instrumentals from Senku Live at Alliance Française in Accra.

After Worlasi emerged from the coffin in the glare of a cheering audience, there was no looking back as he performed back-to-back songs that resonated deeply with his fans spanning ‘Nuse’, ‘Worla: The man and the god,’ among other collections.

The event was graced by award-winning musician, M.anifest.

Songstress Adomaa, Reynolds the Gentleman and Shaker among other A-listers also performed.

Marince Mario, Asi, Kwakwa were among the bloc of fast-rising personalities who made a case for the future of Ghana music through their display of vibrant variety that characterised the night.

The concert came 24 hours after the release of Worlasi’s Extended Play (EP).

The project which was released on November 6 titled, ‘Dios’ is a collaboration between Worlasi and music producer, Drvmroll.

Worlasi also presented awards to personalities who he says have contributed to the his development throughout his six-year professional music career.

Meanwhile, patrons of the show could not get enough of the energy-packed performances that walked the audience through what one fan described as a well-needed night off a somewhat tormentuous 2020.

As a year that has seen a myriad of unanticipated happenings, it was only fair for Worlafest 2020 to execute a delivery that goes down as one of the memorable spectacles to crown the list of firsts.

A celebration of art & music! Lock in on https://t.co/a83BFTswug to catch the live stream of performances. #Worlafest20 pic.twitter.com/cmLaY8OKvx

After entering with his traditional costume in a morbid introduction, he signed off with his recent single ‘Comot’ in an all-white costume signifying victory over that trials that have characterised the year of lockdowns and unrivaled restrictions.

After all, the resolve of the man who rode in on a horse at last year’s edition, was not starved as he risked it all and came out strong.