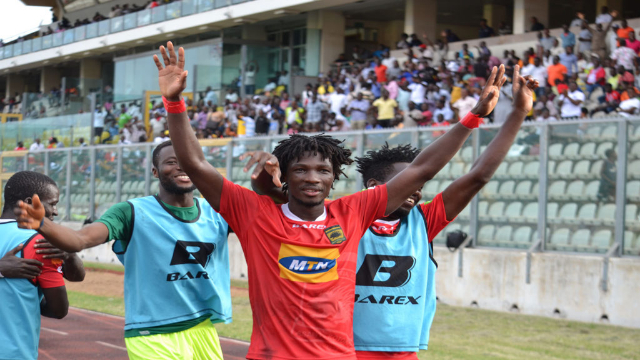 Burkinabe forward Songne Yacouba scored a brace as Asante Kotoko handed Hearts of Oak a 2-0 defeat in the first leg of the offseason clash dubbed "Super Two", at the Baba Yara Sports Stadium.

With the two matches set to be played at the Baba Yara Stadium, Hearts were the home team on Sunday and were dispatched.

In the 39th minute, the Porcupine Warriors opened the scoring after goalkeeper Ernest Sowah failed to parry away a shot from Prince Acquah.

Yacouba was there in time to pounce in on the rebound to make it 1-0.

Kotoko went into the break with the lead despite the Phobians having a chunk of possession.

After the break, Hearts of Oak were seeking to bounce back but were pegged back by the sending off of Robert Sowah.

The centre-back collected his second yellow card in the 58th minute.

Two minutes later, Yacouba doubled Kotoko's lead with a beautiful goal after connecting a pass from the experienced Jordan Opoku.

The second leg will be played next Sunday, 2 September 2018 at the same venue.