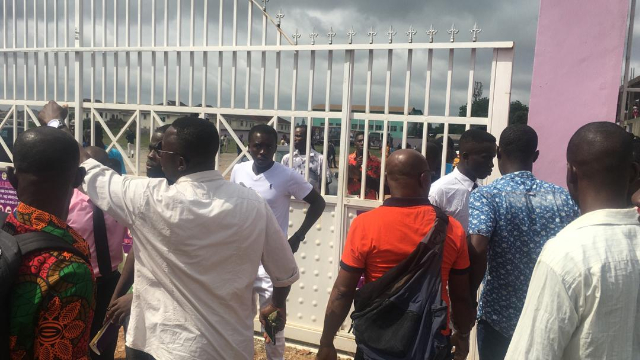 Aggrieved investors who went to the Zoe Outreach Embassy Sunday to demand their locked up cash from the founder of the church met fierce resistance.

A group of police officers and soldiers were stationed at the East Legon-based church in anticipation of the aggrieved customers who had informed pastor Kelvin Kobiri they will be there to demand their monies.

This follows earlier drama at the Zoe Outreach Embassy last week when some people stormed the church, briefly disrupted church service to demand what they say is their locked up investments.

The aggrieved persons mostly men – some of them members of the Outreach – say they were convinced by the founder and leader of the church to invest hundreds of cedis with EL Real Estates and Tikowre Capital.

Mustapha Alor and Thompson Agyeman told Joy News they neither sought professional advice nor checked the registration status of two companies with the regulator, Securities and Exchange Commission because their trust in the head pastor was enough.

They said even when other microfinance institutions were going through crises, Pastor Kobiri, owner of the companies and was able to honour his companies’ financial obligations to them by paying ¢90,000 of the invested capital,¢150,000.

But things came to a head today as many customers are on the church premises again to demand their funds.

When the customers, some of whom have travelled from as far as the Western region came to stage a protest, they were met by the security officers who would not allow them to disrupt the day’s service.

Those who resisted were assaulted by soldiers.

Joy News cameraman, David Ankomah, who was filming the development was also assaulted and his camera was seized.

It took the intervention on the angry customers to retrieve the camera from the military men.

Some senior military officers, however, came to the church in the midst of the scuffle to march the soldiers away.

One of the officers queried the soldiers who had deployed them to the church.