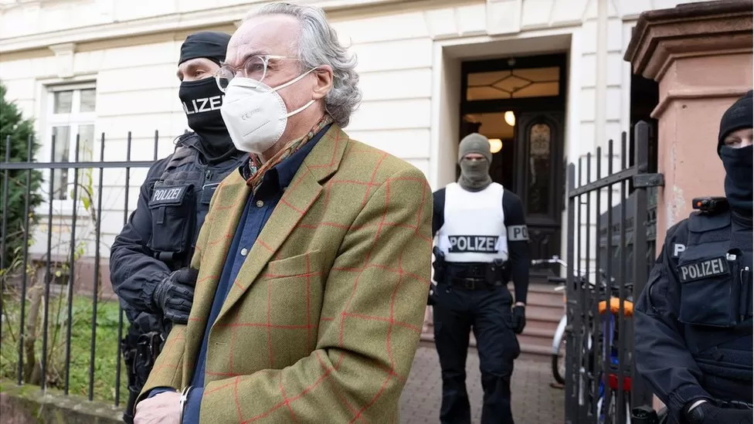 Among the 25 detained was a minor aristocrat called Heinrich XIII

Twenty-five people have been arrested in raids across Germany on suspicion of plotting to overthrow the government.

The group of far-right and ex-military figures are said to have prepared for a “Day X” to storm the Reichstag parliament building and seize power.

A man named as Heinrich XIII, from an old aristocratic family, is alleged to have been central to their plans.

According to federal prosecutors, he is one of two alleged ringleaders among those arrested across 11 German states.

The plotters are said to include members of the extremist Reichsbürger [Citizens of the Reich] movement, which has long been in the sights of German police over violent attacks and racist and antisemitic conspiracy theories.

They also refuse to recognise the modern German state.

Other suspects came from the QAnon movement who believe their country is in the hands of a mythical “deep state” involving secret powers pulling the political strings.

Interior Minister Nancy Faeser assured Germans that authorities would respond with the full force of the law “against the enemies of democracy”.

An estimated 50 men and women are said to have been part of the group, which allegedly plotted to overthrow the republic and replace it with a new state modelled on the Germany of 1871 – an empire called the Second Reich.

“We don’t yet have a name for this group,” said a spokeswoman for the federal prosecutor’s office. The interior minister said it was apparently made up of an organisation “council” and a military arm.

Wednesday’s dawn raids are being described as one of the biggest anti-extremism operations in modern German history.

Three thousand officers took part in 150 operations in 11 of Germany’s 16 states, with two people arrested in Austria and Italy.

Justice Minister Marco Buschmann tweeted that a suspected “armed attack on constitutional bodies was planned”. Ms Faeser said later that the investigation would peer into the “abyss of a terrorist threat from the Reichsbürger scene”.

Who are the Reichsbürger?
So-called Citizens of the Reich reject Germany’s modern democracy and refuse to pay taxes
Once seen as harmless cranks, they are very active and pose a high level of danger, says BfV intelligence chief Thomas Haldenwang
Last year they numbered some 21,000, but they have since grown significantly
10% are thought to be violent, and antisemitism and conspiracy theories are widespread

The federal prosecutor’s office said the group had been plotting a violent coup since November 2021 and members of its central “Rat” (council) had since held regular meetings.

They had already established plans to rule Germany with departments covering health, justice and foreign affairs, the prosecutor said. Members understood they could only realise their goals by “military means and violence against state representatives”, which included carrying out killings.

Investigators are thought to have got wind of the group when they uncovered a kidnap plot last April involving a gang who called themselves United Patriots.

They too were part of the Reichsbürger scene and had allegedly planned to abduct Health Minister Karl Lauterbach while also creating “civil war conditions” to bring about an end to Germany’s democracy.

A former far-right AfD member of the lower house of parliament, the Bundestag, is suspected of being part of the plot, and of being lined up as the group’s justice minister.

Birgit Malsack-Winkemann, who was among the 25 people arrested, returned to her role as judge last year and a court has since turned down attempts to dislodge her.

A prominent lawyer was pencilled in to handle the group’s foreign affairs, with 71-year-old Heinrich XIII as leader.

Public Prosecutor General Peter Frank said Heinrich was among the suspects whom investigating judges had asked to be held in custody.

Heinrich XIII styles himself as a prince and comes from an old noble family known as the House of Reuss, which ruled over parts of the modern eastern state of Thuringia until 1918.

Descendants still own a few castles and Heinrich himself is said to have a hunting lodge at Bad Lobenstein in Thuringia.

The rest of the family have long distanced themselves from the minor aristocrat, with one spokesman telling local broadcaster MDR during the summer that Heinrich was an “at times confused” man who had fallen for “misconceptions fuelled by conspiracy theories”.

As well as a shadow government, the plotters allegedly had plans for a military arm run by a second ringleader identified as Rüdiger von P.

They were made up of active and former members of the military, officials believe, and included ex-elite soldiers from special units. The aim of the military arm was to eliminate democratic bodies at local level, prosecutors said.

Rüdiger von P is suspected of trying to recruit police officers in northern Germany and of having an eye on army barracks too. Bases in the states of Hesse, Baden-Württemberg and Bavaria were all inspected for possible use after the government was overthrown, officials said.

One of those under investigation had been a member of the Special Commando Forces, and police searched his home and his room at the Graf-Zeppelin military base in Calw, south-west of Stuttgart.

Another suspect has been identified as Vitalia B, a Russian woman who was asked to approach Moscow on Heinrich’s behalf. The Russian embassy in Berlin said in a statement that it did not “maintain contacts with representatives of terrorist groups and other illegal entities”.

Several violent attacks have been linked to Germany’s far-right in recent years. In 2020, a 43-year-old man shot dead nine people of foreign origin in the western town of Hanau, and a Reichsbürger member was jailed for killing a policeman in 2016.

The Reichsbürger movement is estimated to have as many as 21,000 followers, of whom around 5% are considered to belong to the extreme right.

DISCLAIMER: The Views, Comments, Opinions, Contributions and Statements made by Readers and Contributors on this platform do not necessarily represent the views or policy of Multimedia Group Limited.
Tags:
Coup
Germany
Heinrich XIII