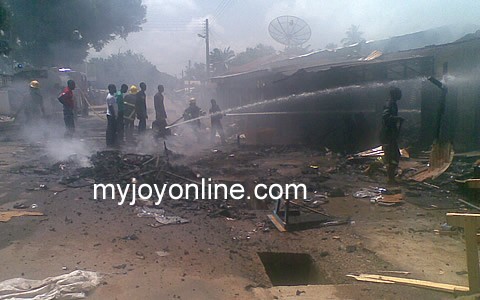 The Committee, under the chairmanship of Justice Patrick Baayeh, a Ho High Court Judge, would among other things find out the cause of the violence and make recommendations to forestall similar occurrences in the future.

Other members of the committee are; Miss Comfort Tasiame, from the Attorney General’s Department, Monsignor Anthony Kofi Kornu and Very Reverend Dr. Livingstone Buama, former Moderator of the EP Church.

The committee has eight weeks to present its findings to government.

Mr Kamel said members of the committee were carefully selected in view of the “diverse nature of the issue” and called for the support of all.

“Let’s remember that the committee has been set up by the President and it has high court powers, so we all have to cooperate with it,” he said.

Mr Kamel expressed appreciation to all stakeholders who helped in restoring relative peace to Hohoe.

Dr Margaret Kwaku, Hohoe Municipal Chief Executive, reiterated the need for both sides-the Zongo community and indigenes of Hohoe to cooperate with the committee to find lasting solutions to the issue.

She expressed worry about unguarded statements from women from both sides and urged opinion leaders to caution them.

Justice Baayeh on behalf of the committee promised to accomplish the task within schedule and called for patience, understanding and cooperation of both sides.

A misunderstanding between the local Zongo community and the indigenes over the issuance of burial rights and electrocution of a boy is believed to have resulted in the communal clashes.

In the melee, the house of Togbega Gabusu VI, Paramount Chief of the Gbi Traditional Area and other properties were vandalized.

Two lives were lost in the community which is still under a curfew and security surveillance.