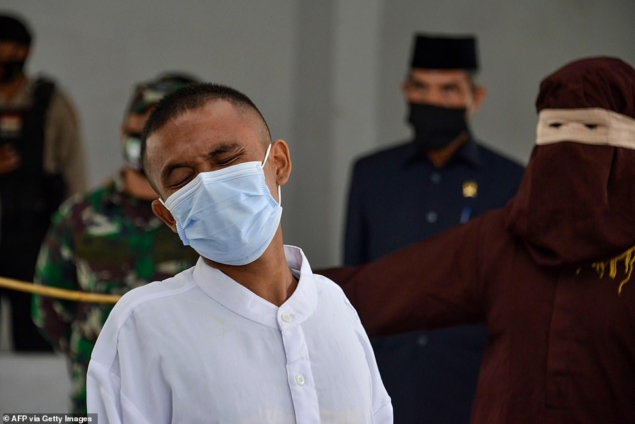 Punishment: A Christian man accused of gambling winces behind his face mask during his caning by a hooded Sharia officer in Banda Aceh today, where authorities inflicted a rare public flogging on non-Muslims

The two accused received 40 lashes each from a masked sharia officer who beat their backs with a stick.

One of them, identified only as JF, said he chose flogging to avoid a criminal prosecution that could have seen him jailed up to six months.

“The Sharia police gave us options and we consciously decided to comply with the Islamic criminal code. No one forced me to choose it,” he said.

Non-Muslims, who have committed an offence that violates both national and religious laws, can choose to be prosecuted under either system.

The caning comes less than two weeks after a male couple were flogged nearly 80 times each for having gay sex, which is outlawed under local Islamic law.

Flogging of non-Muslims is rare, however, with only a handful subjected to the punishment in recent years for crimes including gambling and selling alcohol.

The two Christians were among seven people publicly flogged in the province on Monday.

The five others were Muslims who were whipped for adultery and drinking alcohol – both violations of religious law.

Aceh is the only province in the world’s most populous Muslim-majority country that imposes Islamic law. About 98 per cent of Aceh’s five million residents are Muslims.

The public canings sometimes attract large crowds of eager spectators taking pictures on their phones, but today’s punishments were handed out indoors with only a small circle of observers .

Officials said earlier this year that the floggings had been moved indoors and shorn of the usual opening speeches because of the virus pandemic. The cane-wielding enforcer typically wears a hood in any event.

Aceh adopted sharia after it was granted special autonomy in 2001, an attempt by the central government to quell a long-running separatist insurgency.

Human rights groups have slammed public caning as cruel, and Indonesia’s President Joko Widodo has called for it to end.