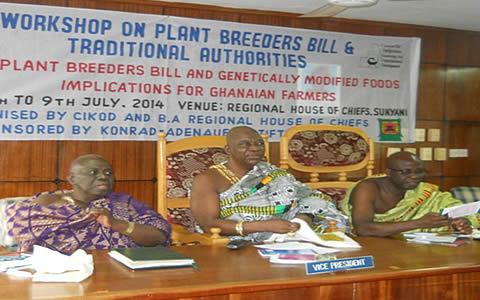 Forty-five paramount chiefs in the Brong Ahafo Region are demanding the suspension of deliberations on the Plant Breeders Act currently before Parliament.

Alternatively, the chiefs said the entire process should be aborted until European countries and others accept Geneically Modified foods.

The chiefs said this in an eight point resolution issued after a one-day workshop on the vexed issue of GMOs and the Plant Breeders Bill.

We, the 45 Paramountcies and 4 Divisional Councils, from the 49 Traditional Areas forming the Brong-Ahafo Regional House of Chiefs, being aware of the need for food sovereignty in Ghana, having met in Sunyani on the 8th of July 2014 and having been educated on the PBB and GMOs do hereby make the following resolutions: