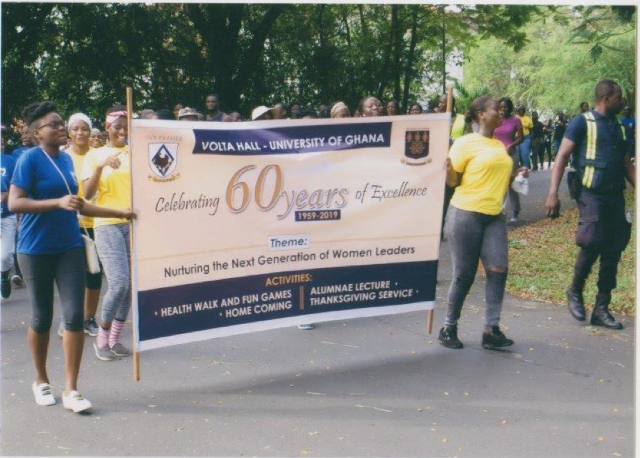 She walked quietly from her dining area into her living room, beautifully set with lovely chairs and foreign upholstery. The octogenarian walked slowly, calculating her steps not because she was not interested in her two visitors for the morning, but mainly because of her age. Prof. Florence Dolphyne is one of the first students to be admitted to Volta hall in the early 60s. She will later become the first and to date the female Pro-Vice Chancellor of the University of Ghana.

According to Prof. Dolphyne, the motto of the Hall was coined by one “Krachi Denteh”. In the beginning, it meant “the hen also knows the approach of dawn, but leaves it to the cock to announce”. With time the motto was shortened and changed to reflect the agency of the female, implying that, the knowledge of the secrets of life and nature is as much a gift to women as it is to men.

This change also reflected the social changes the Hall and its occupants – Ghanaian women – have undergone over the years. The slogan of the Hall is “ladies with vision and style” and the colours are blue and yellow, an adaptation of the University of Ghana colours.

Volta Hall started in 1959 with a few students and has since grown significantly. Originally called the Fourth Hall of the University after Akuafo Hall, Legon Hall and Commonwealth Hall, Volta Hall started operating after Hall authorities got approval from the then University Council. Prior to this, the first cohort of students were housed temporarily in Commonwealth Hall.

“At that time we were only 12 students, and had to see the Senior Tutor before we would get our academic reports,” said Prof. Dolphyne. “We were being treated like secondary school students.”

According to Prof. Dolphyne when the Hall first started, only one block was functional, Block F, although there were four other blocks that were completed with a total of 82 beds. Students were fed in the Dining Hall of Legon Hall and were later moved to Volta hall when the Dining Hall was finally completed in the mid-60s. Today, the Hall is home to over 600 students pursuing various levels of academic degrees within the University.

History and records available at the Hall suggest that the Hall was named after River Volta, the most significant river system in Ghana.

“The idea was that rivers are female and powerful, so in effect, we are building powerful women through education,” said Prof. Dolphyne.

Some alumni of the hall

When Volta Hall started in the 60s, it was mainly governed by expatriates. The first Warden was Ms. Tazella, and she was assisted by Ms. Priestley, the Senior Tutor, and Ms Robinson, the Domestic Bursar. After 14 years of its existence, an alumna from the pioneer batch of students, Christiana O. Kissiedu became the 7th Warden of Volta Hall although there had been two other Ghanaians before her, who were however not alumnae. Since then, management of the Hall has been predominantly by her own alumnae. The current Warden, the 17th, is Dr. Mrs. Eureka Ahadjie Adomako, who was recently installed in a very colourful ceremony.

Some notable Volta hall alumni at the Annual Thanksgiving Service in Nov. 2018

“We are proud that today, you can literally find Volta Hall alumnae in every sector, playing various leadership roles, both home and abroad,” said Mrs Christy Badu, the immediate past Warden of the Hall.

Over the years, Volta Hall has given back to society in various ways.  As part of Hall’s annual week celebrations, the JCR with the support of Hall Management has made donations to hospitals, orphanages and shelter homes.  The Hall has also partnered with organizations such as Mentoring Women Ghana to mentor and empower young women to become responsible citizens.

This year, 2019, Volta Hall turns 60! The theme chosen for the celebration is “Nurturing the Next Generation of Women Leaders.” The year-long celebration started with a grand launch in January and a health walk and screening in May. Other upcoming activities are the homecoming event which is being organized alongside the University of Ghana’s 70th Anniversary homecoming. It is slated for the 9th to 11th of August. There will also be an Alumnae Lecture on the 19th of September followed by a Thanksgiving Service scheduled for Sunday the 10th of November.

“We call on all our past and present students to participate in the various activities to mark our 60th Anniversary, said Ms. Doris Ansah, President of the Volta Hall Alumni Association. “We promise a fun-filled and fulfilling one.”

Throughout the celebrations, efforts will be made to raise funds for the completion of the Women’s Resource Centre on the Legon Campus of the University of Ghana – a joint project between the Hall and her Alumnae Association. You can support us by donating towards this worthy cause into the Halls Account with details as follows: