85 arrested for non compliance of Covid-19 protocols in Koforidua 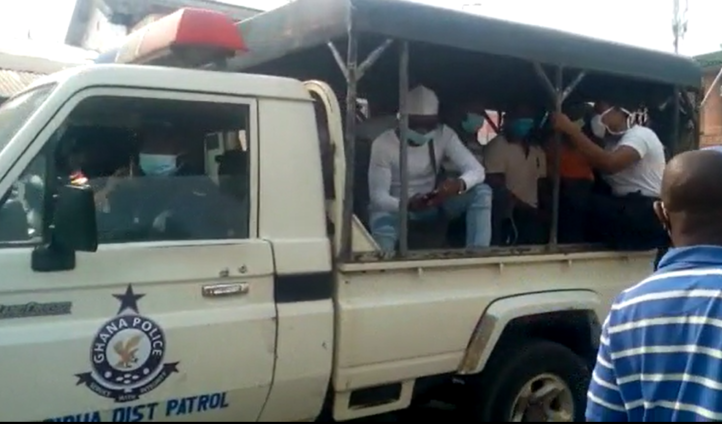 Some 85 persons have been arrested by the Koforidua District Police Command for not complying with the Covid-19 protocols.

They were arrested for not wearing face masks while going about their work in the central business district.

The police kept them under their custody till 5pm when they were issued with warning letters and released.

Koforidua District Police Commander and Acting Operations Commander at the Eastern Regional Police Headquarters Chief Supt Raymond Erzuah said the police will not relent on its effort to enforce the laws on Covid-19 in the interest of the masses.

Speaking to JoyNews’ Maxwell Kudekor, he stated that Koforidua has about 18 active cases making the city almost unsafe for all.

“As we are all away the Covid-19 is escalating. During the Christmas festivities, things were relaxed a little,” he said adding that the failure to comply with the protocols has landed the country its second wave.

Chief Supt Raymond Erzuah explained, “if we don’t get them arrested and ensure that they are aware of the repercussions then our medical facilities will be full.”

He reiterated the President’s point that if citizens are not careful he will be left with nothing but lockdown if the cases go beyond a certain threshold.

Chief Supt Raymond Erzuah stated that a lockdown is not ideal for anyone because of the repercussions it had on families across the country.

Thus, he and his team will make sure people are protected from the virus while ensuring the protocols are observed.

He also advised the various churches and mosques to observe the protocols or be dealt with according to Law.

Chief Supt Raymond Erzuah said that these people who were aressted were only warned because it is the first time police has stormed town to ensure compliance.

However, on their next operation persons arrested for floating the Covid-19 protocols will be sent to court and made to pay a fine, he added.

DISCLAIMER: The Views, Comments, Opinions, Contributions and Statements made by Readers and Contributors on this platform do not necessarily represent the views or policy of Multimedia Group Limited.
Tags:
Covid-19 Safety protocols
safety protocols