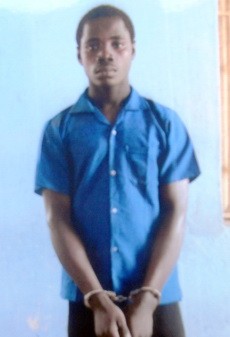 A Circuit Court in Bekwai has handed a 12-year jail term to Kwame Buba, a man who could not control his libido.

The unemployed young man at Adansi-Akuapim became a terror to a primary-three pupil of Kronom-Afrancho D/A Basic School after turning the poor girl into a sex machine.

The presiding judge, Daniel Kwaku Obeng, convicted him after confessing to the crime.

Prosecuting, Detective Sergeant Stephen Ofori informed the court that the complainant, Akua Serwaa, was the mother of the victim, who lived in the same vicinity with the convict.

The complainant brought the victim to the village to live with her during vacation.

On July 20, 2012, the victim went out to play at a place near Buba’s house.
The convict invited the 10-year-old to send her on an errand.

The victim, who did not suspect any foul play, responded to Buba’s call.
But the man dragged the girl to a nearby house that had no occupants where he sexually assaulted her.

Kwame Buba warned the victim not to disclose her ordeal to anyone.
The victim became ill a few days later, compelling the mother to conduct a body check on the girl.

The complainant found offensive discharges coming from the vagina of her daughter and quizzed her.

It was then that the victim disclosed her ordeal to her mother.
A report was made to the Adansi-Anwiaso Police station which issued a medical form for the victim.

Buba was charged and later arraigned.