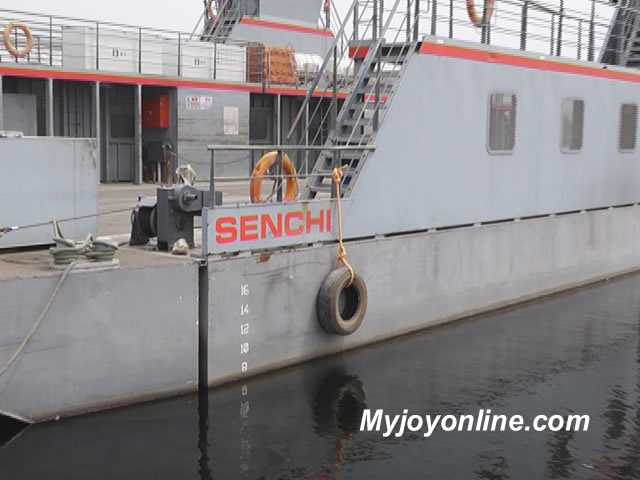 The two ferries that have been docked at Senchi in the Asuogyaman district of the Eastern Region risk permanent deformation unless plans to transfer them to Buipe and Yeji are hastened.

Plans to dismantle the vessels for onward transfer to Buipe in the Northern Region and Yeji in the Brong Ahafo Region to start new operation are being delayed.

A maritime expert who spoke to Joy News’ Latif Iddris on condition of anonymity warned, the ferries could collapse if they are left un-navigated for long.

The two vessels were commissioned on March 10 2014 to replace the Adome Bridge when it became necessary to refurbish the bridge which had served the country for over fifty years without major rehabilitation.

As a result these ferries were brought in from Holland, at an estimated cost of 10 million Euros. The vessels served dual purpose as it promoted local tourism and helped the people of Asuogyaman and their counterparts from the middle belt and upper parts of the Volta Region to cross the volta river and do business without difficulty. But when president Mahama reopened the Adome Bridge in December last year, the ferries became redundant. The delay in navigating these vessels again is already taking a toe on the 10 million Euro vessels.

Not long ago, the vessels served the people. The drastic change in fortune makes it hard to believe. There are cobwebs everywhere you look on the vessels. Parts have become rusty; gradually deforming the once flashy Senchi ferry that got people troop to Senchi. There is also the potential of fungus attack which according to a maritime expert who spoke to JoyNews on the condition of anonymity could have dire consequence on the ferries.

Joy News sources have revealed that the delay is because authorities are waiting to pay huge sums to expatriates to come and do the dismantling. But the expert tells Joy News engineers at Volta Lake Transport Company have what it takes to take apart the vessels.

The idleness of the ferries has left residents with no option but to patronize the services of private boat owners to cross the river to do business at the other side.

Captains and traffic wardens who worked on the ferries have now added up to the number of unemployed youth in the country. These youth cannot wait to get back to work again to help fend for their families.

The decay of these vessels will cause the country huge financial lose if the expensive batteries on which the vessels navigate have to be replaced all because of the delay. A potential financial lose in the making.