ActionAid partners with UENR to strengthen work on research and development, build capacity on climate change 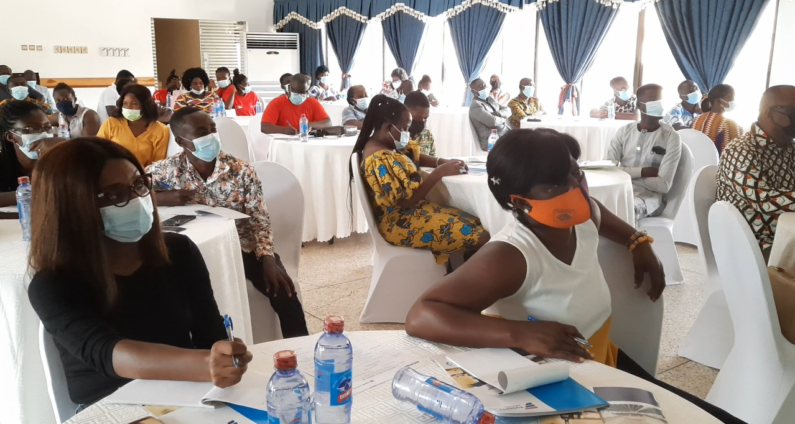 Participants at the ActionAid climate change in Sunyani

The impacts of climate change on the world, particularly the vulnerable, remain a critical issue that requires strategic partnerships in its mitigations and adaptations.

ActionAid, the non-governmental organization, has hence partnered with the University of Energy and Natural Resources (UENR) to leverage its strengths to champion sustainable development in the ongoing climate change.

According to the Head of Programmes, Innovations, and Campaigns at ActionAid Ghana, John Nkaw, the mutually beneficial partnership is centred on providing support in the areas of research and development, capacity building, joint seminars among others on climate change and climate justice.

The support areas, according to John Nkaw, are in line with ActionAid’s Country Strategy Paper (CSP) and the organization’s strategic goals.

He made the remarks at a stakeholder’s seminar on climate justice in the Bono Regional capital, Sunyani. It was on the theme; “Socio-Economic and Environmental Effects of Climate Change on Women and Households in the Bono Enclave of Ghana”.

John Nkaw also said with the partnership, they would be able to disseminate research findings on climate change in a way that would build consensus and be attractive to policymakers and implementers, including ministries, departments, and agencies of government, Parliament as a key target, and district assemblies.

He explained that after a Notre Dame research ranked Ghana as highly vulnerable to climate change, ActionAid’s research on government policies indicated that the adaptation plans needed to be a lot more gender-friendly with funds increased to review the action plan and improve the quality of implementation.

He also said the effect of climate change is making the youth move away from agriculture because it’s unattractive.

This, he noted, requires the government to strengthen policies geared towards promoting climate-resilient sustainable agriculture and agroecology.

The programs head further said the gap in the awareness on climate change issues should be closed.

“Policies need to be domesticated. Many more people need to understand how or what is in the policies and make contributions in terms of implementation”, he stressed.

The Dean of the School of Graduate Studies, UENR, Prof John K. M. Kuwornu, expressed the University’s delight in the partnership with ActionAid Ghana and said they are open to partner with governmental organizations and other NGOs, in the fight against climate change.

This, he insists, is consistent with the UN Sustainable Development Goals 11 (Sustainable Cities and Communities), 12 (Sustainable Production and Consumption), and 13 (Climate Action).

Prof Kuwornu said the University has schools such as the School of Agriculture and Technology, the Earth Observation Research and Innovation Center, and Center for Climate Change and Gender Studies that are undertaking research relating to climate to provide policy options regarding mitigation and adaptation.

“Women are hard hit because they lack access to resources, and they depend solely on the farm as a source of income. So when unpredictable rainfall exists due to climate change, access to water for farming becomes a problem, and women struggle to make ends meet both at the household level and their business activities”, he explained.

He noted that the preservation of trees is key as they absorb the carbon dioxide emitting into the atmosphere to reduce the impact of climate change, and therefore applauded the Presidential initiative of greening Ghana.

Prof Kuwornu, however, said more needs to be done by state institutions to check deforestation, embark on agro-ecology and ensure the right quantity of fertilizers are applied to the soil, based on soil test analysis.

The smallholder farmers appealed to government and other state institutions to also focus and regulate firms that import agrochemicals into the country which contribute to climate change.

Other participants also said stringent laws must be passed to deal with activities contributing to climate change.