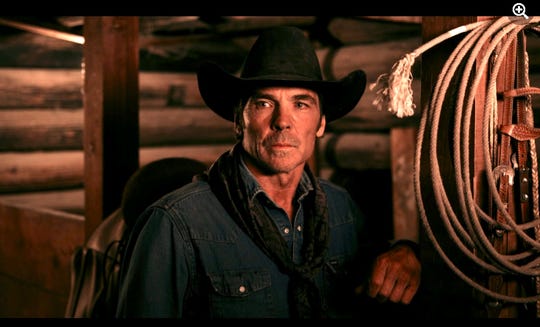 Jay Pickett on the set of "Treasure Valley." Pickett died before shooting a scene on the modern Western at age 60. (Photo: Nick Fornwalt/Treasure Valley)

Jay Pickett, the ruggedly handsome actor who appeared in daytime dramas including “General Hospital,” “Days of Our Lives” and “Port Charles,” died July 30 on an Idaho movie set filming “Treasure Valley.” He was 60.

According to friend and fellow “Treasure Valley” actor, Jim Heffel, Pickett died while on a horse waiting to film a scene in the modern Western.

“Yesterday I lost a good friend and the world lost a great person. Jay Pickett decided to ride off into the Heavens,” Heffel wrote in a July 30 Facebook post announcing Pickett’s death. “Jay died sitting on a horse ready to rope a steer in the movie Treasure Valley in Idaho. The way of a true cowboy.”

Pickett wrote the screenplay and starred in “Treasure Valley,” producing the film with Heffel and Tucson Vernon Walker.

“He will be truly missed,” Heffel wrote. “Ride like the wind, partner.”

Fellow “Treasure Valley” actor and director Travis Mills wrote on the film’s official Facebook page about Pickett’s passing, saying, “he died suddenly while we were on location preparing to film a scene.”

“There is no official explanation for the cause of his death but it appears to have been a heart attack,” Mills wrote. “Everyone present tried as hard as they could to keep him alive. Our hearts are broken and we grieve for his family who are so devastated by this shocking tragedy.”

Mills paid tribute to Pickett and remembered him as “an incredible man. He was kind, sweet, and generous.”

“It is difficult to find the words right now to say more. His closest friends have said that he was very happy making ‘Treasure Valley’ and my hope is that he truly was,” Mills wrote. “He was doing what he loved: acting, riding horses, making movies. And he was magnificent.”

Born in Spokane, Washington on Feb. 10, 1961, Pickett grew up in Caldwell, Idaho.He started his daytime drama career as Dr. Chip Lakin in “Days of Our Lives,” starring for two years starting in 1991.

“This is one of the most difficult posts I’ve done,” Wilson wrote. “My heart is broken to hear that this incredible person has passed. Words cannot describe how much you touched my life…. your friendship, advice, and support made me feel so grateful and lucky.”

Wilson recalled a fond memory from her first day on the “Port Charles” set with Pickett, adding that “the fun adventures continued from there. So happy to have shared all those moments with you.”

Pickett starred as Detective David Harper in “General Hospital” from 2006-2008.

“The sudden passing of my pal Jay Pickett is very sad,” Shriner wrote on Twitter. “He loved acting and Westerns, and when we got together we laughed a lot. R.I.P. Jay.”

The sudden passing of my pal Jay Pickett Is very sad . He loved acting and Westerns , and when we got together we laughed a lot . R.I.P. Jay . @GeneralHospital #Portcharles pic.twitter.com/rgVkbkFcSY

Stuntman Ardeshir Radpour shared a Facebook tribute featuring a cowboy hat-clad Pickett. “See you soon cowboy!” Radpour wrote over the photo. “We love you and will miss you!”

“Treasure Valley” was the second Western that Mills and Pickett had worked on together and a follow-up to 2012’s “Soda Springs,” that Pickett co-wrote and starred in.

The film was on its seventh day of filming Friday — about one-third of the way through the schedule, Mills told the Idaho Statesman.

“We know one thing for sure — the footage that we’ve gotten will be used in some way to pay tribute to Jay,” Mills said.

Pickett is survived by his wife of 35 years, Elena, and their three children, Maegan, Michaela and Tyler.