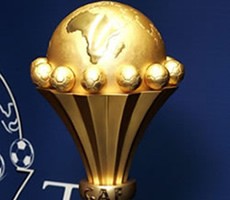 Burkina Faso are aiming to lift the Africa Cup of Nations for the first time – in a final in which the kick-off time has been pushed back to 1830 GMT.

The Stallions surprised many by reaching the final, but they will have to overcome a resurgent Nigeria.

The Super Eagles have injury concerns with doubts over the fitness of Victor Moses and Emmanuel Emenike.

The Burkinabe have been boosted by Jonathan Pitroipa’s return but are missing top scorer Alain Traore.

Before the tournament, Nigeria coach Stephen Keshi was criticised in some quarters for choosing six home-based players in his squad and leaving out established names such as Peter Odemwingie and Obafemi Martins.

That strategy has paid off handsomely, however, with the likes of Sunday Mba and Godfrey Oboabona impressing, giving the team a renewed energy and ambition.

The experience of Chelsea duo Moses and John Obi Mikel, along with the sharp-shooting of striker Emenike – who is joint tournament top scorer on four goals – have also been key factors in the country reaching their first final since 2000.

Keshi says he will only decide on Sunday whether to start Moses or Emenike in the final, with doubts remaining over their fitness.

The Nigeria coach can become just the second man to win the trophy as a player and a coach and says he recognises some similarities in his current squad to the title winners he captained in 1994 – a squad that included Jay-Jay Okocha, Sunday Oliseh and goalkeeper Peter Rufai.

The Stallions, meanwhile, have consistently defied the odds at this tournament.

Drawn with Nigeria and defending champions Zambia in the group stage, they scored a last-minute equaliser to deflate the Super Eagles in Nelspruit, and followed that up with a convincing 4-0 win over Ethiopia.

Needing a draw against Zambia to qualify, they lost striker Traore to injury but their rearguard action saw the champions return home early.

The confusion over the availability of playmaker Pitroipa – who had his ban rescinded – and a long delay in travelling to Johannesburg have combined to deny them the ideal preparation for the biggest match in the country’s history.

They will also have to contend with not playing on the now infamously poor Nelspruit pitch for the first time in the tournament, having contested all five of their games to date on the much maligned surface.

For a team that had never won a Nations Cup match away from home soil before this tournament, however, their progress under coach Paul Put is remarkable.

Burkina Faso have never beaten Nigeria, but as the Nations Cup proves time and again, history can be a dangerous benchmark to predict any match, especially a final – as the Zambians proved against perennial favourites Ivory Coast last year.

“There were a lot of doubters when I first arrived in [Burkina Faso’s capital] Ouagadougou to take up my post.

“I believe many were hoping for a Mourinho-type coach. Over the years I have gained experience of working in Africa. I know what I am capable of, how to approach people, how to motivate, how to plan tactics.

“It is very important to give players confidence and a belief in what they are doing. It is also vital to remember the ordinary man in the street in Burkina Faso.

“Many are very poor and do not have much to look forward to apart from football. When their country is playing well, it makes their troubles more bearable.”

“The 1994 squad was unbelievable. We were brothers, there was a great spirit in the team.

“Now there is talent, but we need a strong mentality and character.

“I can understand the apprehension of the public over the two players [Moses and Emenike] but we must be a little patient, because I know that the two of them want to play in the final and the medical team is working round the clock.”