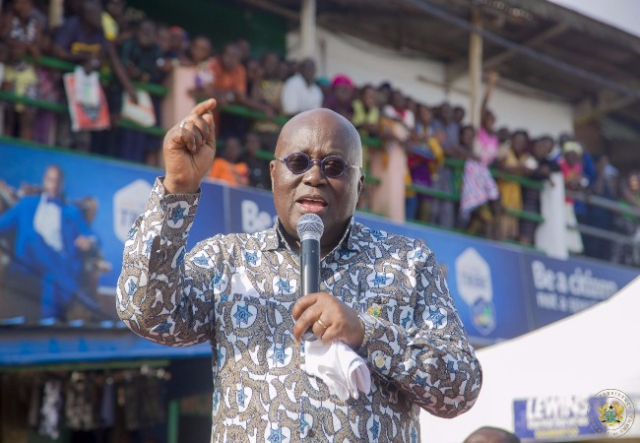 President Nana Akufo-Addo will from Thursday embark on a week's tour of the Northern, Upper East and Upper West regions.

This tour comes on the heels of the President’s recent 3-day tour of the Volta Region, having earlier visited the Brong Ahafo and Western Regions.

Beginning from the Upper East Region, President Akufo-Addo will in the two-day tour, inspect ongoing work on the Bongo-Balungu-Namoo-Zorko road and visit the 1-village-1-dam project site at Kuyellingo in Bongo.

He will also inspect ongoing work on the Navrongo-Chuchuliga-Sandema Road, cut the sod for the construction of a new district police headquarters and interact with chiefs and traditional rulers, amongst others.

Whilst in the Northern Region, from Saturday, the President is expected to cut the sod for the construction of the Nasia-Janga Road and inspect ongoing works on the Nalerigu/Gambaga town roads.

He will also cut the sod for the 1-village-1-dam Integrated Agriculture with Renewable Energy for Poverty Eradication (IAREPE) project in Savelugu and construction of a district hospital in Tolon.

The President will as well inspect ongoing works in the construction of a warehouse there as well.

The President will also commission the Motor king assembly plant at Lamashegu, cut the sod for the construction of an accident and emergency centre at Yapei/Kusawgu, and will interact with Chiefs and traditional rulers in Damongo, Buknkrugu, and Nalerigu/Gambaga.

In the Upper West region, the President is expected to commission the new Upper West Regional House of Chiefs building and a new library/Amatrol laboratory complex of the Wa Polytechnic.

The President will end the tour on Wednesday 25th July, 2018.