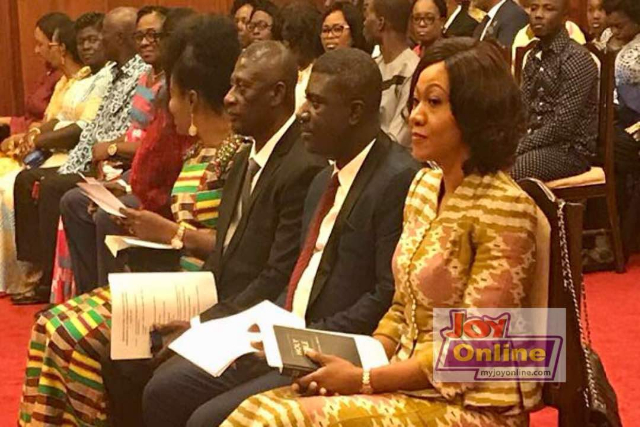 The President, Nana Akufo-Addo has sworn in Jean Adukwei Mensa as the new Electoral Commissioner to take over from the Charlotte Osei-led commission.

The Executive Director of Institute of Economic Affairs (IEA) will be deputized by the Head of the Political Science Department of the University of Ghana, Dr Eric Bossman and the Director of Electoral Services at the Electoral Commission, Mr Samuel Tettey.

A corporate lawyer, Mrs Adwoa Asuama Abrefa has also been sworn in as a member of the commission.

At the swearing-in ceremony Wednesday, the President admonished the new EC heads to be apolitical in the discharge of their duties.

The four were nominated by the President and approved by the Council of State following the impeachment of Charlotte Osei and her two deputies, Georgina Opoku Amankwa and Amadu Sulley.

The three were impeached after a judicial committee set up by the Chief Justice, Sophia Akuffo found them guilty of procurement breaches.

The Supreme Court has given its green light for the swearing in of the four after it threw out an injunction seeking to prevent same.

The plaintiff, Fafali Nyonator argued that the swearing in be put on hold until an earlier suit she filed challenging the impeachment of Charlotte Osei was determined.

Editor-In-Chief of the New Crusading Guide Newspaper has also filed a suit challenging the impeachment of Charlotte Osei.

He argues that the impeachment be declared unconstitutional and of no effect because stated misbehaviour and incompetence upon a proper construction of the constitution was only valid if such misbehaviour was related to the core duties of the Electoral Commissioner.

A seven-member panel of the Supreme Court, however, threw out Fafali Nyonator’s injunction application; stating that Article 2 clause 2 of the constitution made provisions for reinstating Charlotte Osei if it does turn out her removal was unconstitutional.