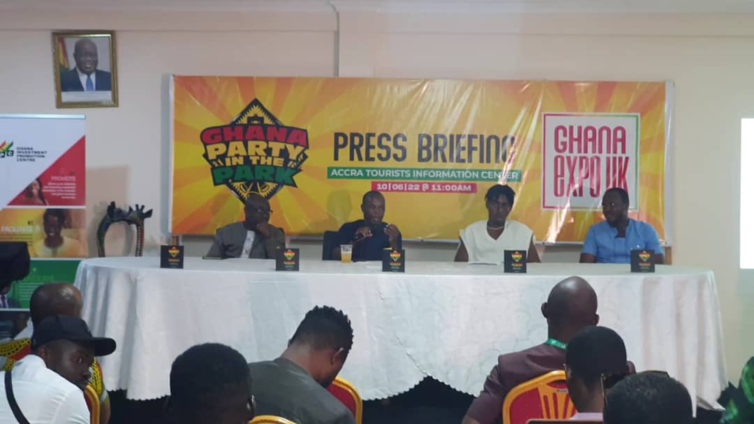 The Akwaaba Group held a press briefing for the forthcoming Ghana Party in the Park UK festival at the Accra Tourism Information Centre on Friday.

As part of promoting and educating people about the event, media houses, personalities and bloggers were invited for a rundown.

According to the CEO, Mr Dennis Tawiah, the motive behind the briefing was to engage the Ghanaian media to highlight the purpose of the upcoming festival in the U.K.

In addition to that, Mr Tawiah encouraged the media to throw more light on positive news regarding the Ghanaian music industry.

Although the meeting was chaired by the CEO, he was not the only one to address the press – the Director for Product Development and Investment at the Ghana Tourism Authority (GTA), Benjamin Anane Nsiah, also talked about the essence of partnering with Akwaaba UK to bring the brand’s flagship event to fruition.

“We have to engage the historical diaspora and the second or third generation,” said Mr Anane Nsiah. “And events like Ghana Party in the Park are excellent meeting points to convince them to think about Ghana as a hospitable tourism destination,” he continued.

He went on to add that “we have to let them know that Ghana is a fun place to live in.” He also noted that it is important to “protect” the Ghanaian brand out there.

Furthermore, Joseph Hanson – a representative of the Ghana Investment Promotion Centre (GIPC), addressed the press regarding their inclusion in this year’s edition of the event.

As the name of the outfit implies, they are in the business of investing and promoting everything Ghanaian, thus, they are keen on backing the organizers of the event with any form of support that is required of them.

Towards the end of the briefing, the guests were provided with a forum for questions —and one of the key elements regarding travelling for the coverage of the event was raised: letters of invitation for visa application.

According to popular blogger Attractive Mustapha, the little the organizers could do to also support media personalities in return was to extend letters of invitation to aid them to apply for visas.

Appearing to be the mouthpiece of his colleagues, he pleaded with the organizers of the event to assist the media in the acquisition of documents required for visa application for travelling to cover the event in the U.K.

Although he [Attractive Mustapha] claimed he has no issues regarding visa applications and letters of invitation from organizers of events held abroad, his colleagues complain to him about organizers’ reluctance in issuing invitations to media personalities.

In response, award-winning disc jockey and representative of the Akwaaba Group, DJ Mensah, told the press that they need to educate themselves on necessary travelling requirements, otherwise, they will end up getting “bounced.”

He further added that “left to the Akwaaba Group alone, we would carry all media personnel from Ghana to the UK,” said DJ Mensah. “But there is a standard the British High Commission goes by. I would like the media to know and study that,” he admonished.

“We can give you whatever you need – our support. But if you do not have the right requirements to get visas, you will be denied,” he stressed.

Even though Akwaaba Group does not issue visas, the CEO, Mr Tawiah, reassured the press that his group would pay attention to “treating the media better” when they request letters of invitation for visa application.

Ghana Party in the Park is slated for July 16. It will take place at the Trent Park in London.

As part of the new activities for this year, Ghana EXPO UK will take place on July 14.

This according to the CEO is to create the opportunity for patrons to do business with the sponsors of the event.