18th edition of Ghana Party in the Park UK launched 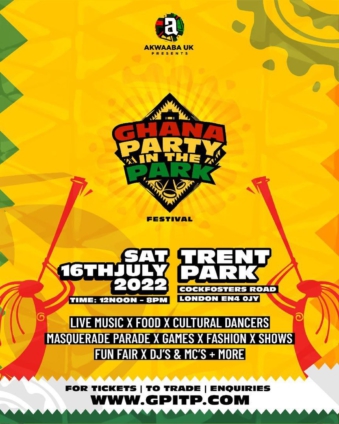 Ghana Party in the Park

The Akwaaba Group launched the eighteenth edition of the Ghana Party in the Park UK on Tuesday, 7th June 2022 at the British High Commissioner’s residence in Accra.

According to the CEO of Akwaaba Group, Dennis Tawiah, this year’s edition of the event has successfully captured the attention of Corporate Ghana. The bodies include the Ghana Investment Promotion Centre (GIPC), Ghana Tourism Authority (GTA), Blue Rose Limited, and Ghana Cocoa Marketing Company (UK) Ltd, among many others.

On the heels of this, the event is expected to host an EXPO dubbed Ghana Party in the Park EXPO for the first time on the 14th of July. This according to the CEO is to create a business network between stakeholders and customers.

As part of the new initiatives for this year, Akwaaba Group signed an agreement with Charterhouse (organizers of Ghana Music Awards), where the winner of the Best New Artist category will be flown to the U.K to perform under the auspices of the organizers of Ghana Party in the Park. In this instance, the winner, Black Sherif, will be performing at the main event.

According to Mr Tawiah, this is to promote new artistes who are making strides in Ghana to the rest of the world.

Meanwhile, the artistes headlining this year’s edition are yet to be announced.

A post shared by Ghana Party In The Park (@ghanapartyinthepark)

The ultimate goal of the festival is to showcase Ghanaian music, food, arts, fashion etc. to the world.

The annual festival, which started in 2005 and has been organized by the Akwaaba Group, attracts over 10,000 people from around the U.K, Ghana, Holland, Germany, France, Canada and the U.S, making it one of the biggest Ghanaian events outside of the West African country.

The event is slated to take place at Trent Park in the U.K on the 16th of July.

The 2022 edition of the festival is supported by The Multimedia Group.