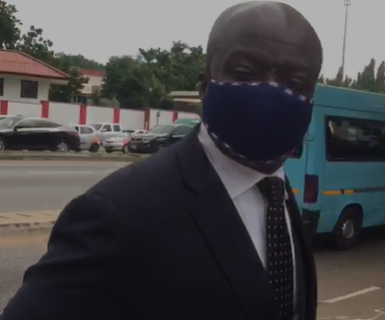 A Kumasi-based Lawyer, Akwasi Afrifa, who accused the Chief Justice, Kwesi Anin-Yeboah, of demanding a $5 million bribe, has defended his claims.

Speaking to the press after several hours of interrogation at the Criminal Investigations Department (CID) of the Ghana Police Service on Monday, he said, “I have not done anything wrong. If you look at the accusations against me, I have given my response. The response is now public knowledge.”

Mr Akwasi Afrifa arrived at the CID Headquarters at about 9 am on Monday and left the premises later at 2 pm.

He, however, turned down calls to make further submissions on the matter.

His presence at the CID Headquarters follows the Chief Justices’ request to the Criminal Investigations Department to investigate the said matter.

Mr Akwasi Afrifa, Esq, in response to an invitation by the General Legal Council, alleged that his former client, Ogyeedom Obranu Kwesi Atta IV informed him that Chief Justice Kwesi Annin-Yeboah, “demanded a bribe of ¢5,000,000 for a successful outcome of his case and that he had already paid ¢500,000 to the Chief Justice.”

But in a letter to the Inspector General of Police dated July 12, signed by the Judicial Secretary, Justice Cynthia Pamela Addo, the Chief Justice dismissed allegations levelled against him, to the effect that he demanded a $5million bribe to influence a case pending before the Supreme Court.

The letter also noted that “His Lordship is saddened that without any shred of evidence, his name has been dragged into this sordid and potentially criminal matter.”

On the said matter, the National Democratic Congress (NDC) has called on Parliament to invoke Article 278 of the 1992 Constitution to compel President Akufo-Addo, to establish a Commission of Inquiry to probe the $5million bribery allegation.

General Secretary of the party, Johnson Asiedu Nketia, explained that the Chief Justice, who is the accused in the said matter, cannot be the very authority to set up a committee to investigate and declare judgement.

“The difficulty, however, with is this is that the investigations would concern the Chief Justice who is the subject of the bribery allegation in this matter and in whom disciplinary authority against judicial officers is vested under section 18 of the Judicial Service Act.

Therefore, good governance dictates that the Chief Justice steps aside during the pendency of the investigations by the Judicial Service relative to the issue of alleged misconduct on his part, as a Supreme Court Judge,” he stated.

DISCLAIMER: The Views, Comments, Opinions, Contributions and Statements made by Readers and Contributors on this platform do not necessarily represent the views or policy of Multimedia Group Limited.
Tags:
Akwasi Afrifa
Chief Justice Anin-Yeboah
Criminal Investigations Department