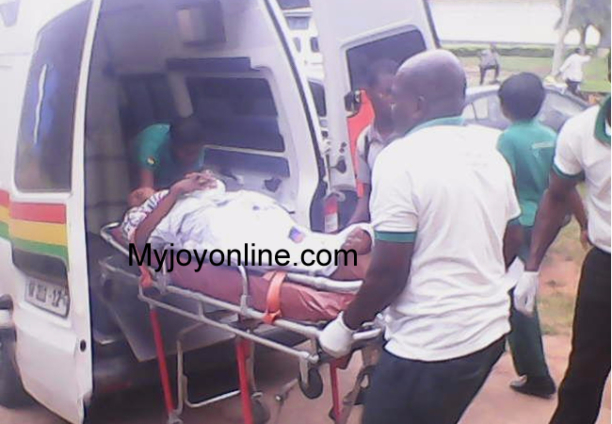 A pregnant woman onboard one of the buses involved in the fatal road crash on the Accra-Kumasi Highway, spontaneously delivered her baby and died shortly after.

The baby however, survived and has been sent to the hospital while the body of the yet-to-be-identified mother has been deposited at the morgue of the Enyiresi Government Hospital in the Eastern Region.

Latest reports put the death toll at 12, after three more persons were confirmed dead on arrival at the hospital. Nine persons died on the spot when the two VIP long buses with over 60 passengers onboard collided head-on at Ankaase, near Osino early Friday, October 3.

Joy News’ correspondent Kofi Siaw reports that hospital officials are struggling to care for the injured as their conditions continue to deteriorate.

Three victims, whose conditions are said to be beyond the care of the facility have been referred to the Komfo Anokye Teaching Hospital in Kumasi, the Ashanti Regional capital.

One bus heading to Accra from Kumasi and the other heading to Kumasi from Accra collided head-on after the Accra-bound bus overtook a stationary cargo vehicle on the road.

The driver and mate on the Kumasi-bound bus died on the spot. The other driver was badly injured below the waist.

An eyewitness and a security man, Amadu Abdulai, who spoke to myjoyonline.com said the accident happened around 1:23am.

He said a woman who was flung from one of the buses landed on him, screaming the name of her relative, ‘Naomi’!

The two buses fell on either side of the road.

The dead, some of them found under the badly damaged buses, have been retrieved.