Apeatse Explosion: Survivor narrates how her wedding plans fizzled out with the flames - MyJoyOnline.com

Apeatse Explosion: Survivor narrates how her wedding plans fizzled out with the flames 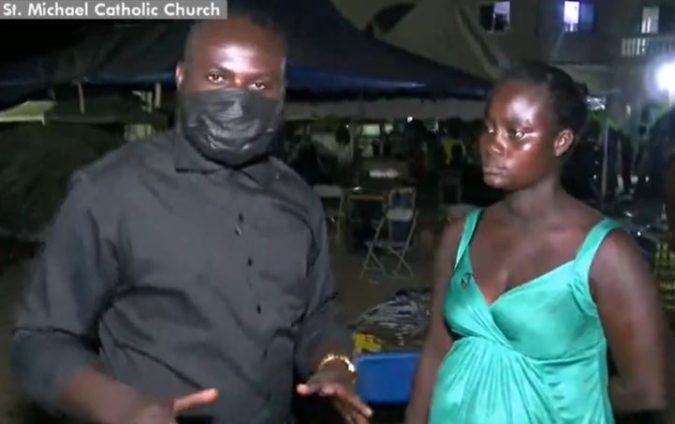 It was supposed to be a day of joy, the day her dream for many years was to materialise, but it did not happen because of a disaster that claimed 14 lives, injured many and displaced hundreds.

January 20, 2022, will go down as an unforgettable day in the history of Apeatse. The indigenes who were greeted with an unexpected explosion in their town, will always remember that day with anger and bewilderment.

The town was torn down in ruins by an explosion that resulted from a collision between a vehicle carrying explosives and a motorcycle. Many lives and livelihoods have been affected. The affected include Benedicta Morgan, a young woman whose wedding was abruptly cancelled due to the unfortunate incident.

What was supposed to be a memorable event for Benedicta and her would-be husband fizzled out with the flames that razed down the town- her wedding couldn’t come off as scheduled.

Her wedding gown, champagne and other items for the event were destroyed entirely. Even the church where the ceremony was to be held was not spared – it went up in flames. In fact, her hopes of being a wedded wife after six years of living with her fiancé were dashed about 48 hours before the ceremony.

A despaired Benedicta Morgan, who is among the many residents still recovering from the trauma due to the incident, narrated her ordeal to JoyNews.

“I have been with my partner for six years. We have now been able to pull resources together for our marriage. We have paid for everything; food, drinks, our clothes for the wedding, and were getting ready for the event which was to take place on Saturday and Sunday, but all our items have been destroyed alongside the explosion.”

The wedding has been called off indefinitely, she said.

This is not the only pain the young lady who is heavily pregnant has to deal with. Her woes are further worsened because she has lost a nephew to the tragic incident.

Her elderly sister, who, according to her, has been a pillar of support, has also been hospitalised due to an injury she sustained in the leg. She said her sister, who is also pregnant, is in critical condition after a metal penetrated her thigh.

“She was at her shop when the incident happened. She was running to take cover when she heard the explosion, but unfortunately, she couldn’t make it to a safe place. A metal pierced through her leg. I’m appealing to all to come to her aid because she is pregnant and is in a critical condition,” she said.

On Thursday, a vehicle carrying mining explosives left Apeatse, a mining community in the Western Region, in ruins.

The incident claimed about 14 lives and has rendered many homeless.

The accident is said to have occurred after a motorcycle collided with the vehicle carrying the mining explosives.

Residents are calling on all and sundry to come to their aid with relief items to help restore their livelihoods, despite efforts by the government and other institutions.