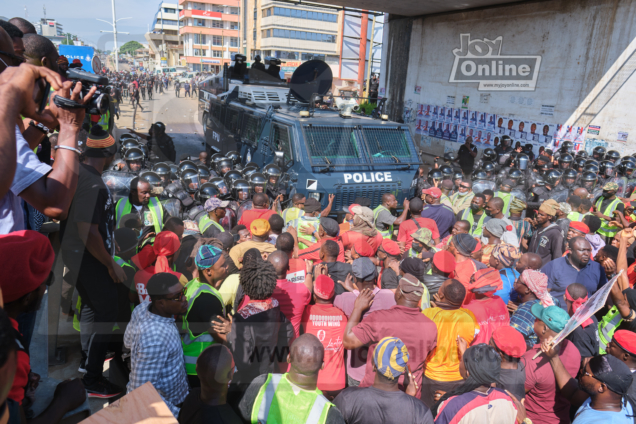 The Deputy Minister for Information, Fatimatu Abubakr, says it appears the conveners of the Arise Ghana demonstration are shirking responsibility in the role they played in the violence that ensued between protestors and police personnel.

According to her, the conveners had failed to adequately educate and sensitise protesters on the limitations of their actions on protest grounds as well as the routes set out by the Accra High Court.

She noted that in Bernard Mornah’s narration of events that had led to the clash and its aftermath, he had failed to take responsibility for his actions and inactions.

Speaking on JoyNews’ PM Express, she said “As a lawyer I know very well that the rights of every single Ghanaian guaranteed under Article 21 Clause 1d of the 1992 Constitution is such that everyone who wants to protest has the opportunity to do so in this country without anybody trampling upon their rights. But every right comes with its responsibility.

Fatimatu Abubakar stated that had the conveners agreed to use the routes established by the Accra High Court, protesters would not have clashed with the police putting lives and property at risk.

“’A person taking part in a special event shall obey the directions of the police officers guarding the proper movement of any other person or vehicles and generally to maintain order.’ That is the law from the Public Order Act.

“So when you reach out to people, invite Ghanaians to come out in their hundreds to join in a protest, as leadership of the organisers of Arise Ghana also have the responsibility to educate and sensitise the protestors that we can do everything we want to do, but it should be within the remit of the law.”

Her comments were in reaction to an earlier narration of events by Bernard Mornah who claims the police had been the ones to have instigated the violence and not the protestors.

According to him, the police without provocation had started advancing towards gathered protesters and began shooting rubber bullets and tear gas into the crowd.

This had resulted in the subsequent pelting of stones and burning of tyres by the protesters.

He added that some leading members of the National Democratic Congress may have been injured as a result of the mayhem.