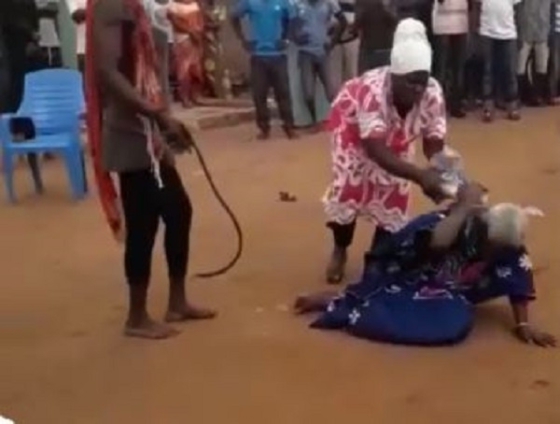 The Ark Foundation, Ghana has condemned the lynching of a 90-year-old woman in the East Gonja Municipality.

The woman identified as Akua Denteh was accused of witchcraft by a local fetish priestess. This incited the inhabitants of the community against her and culmilated in her gruesome murder.

According to the Ark Foundation, the barbaric incident “consists of several infractions of the legal and human rights of the deceased,” which include, the wrongful accusation of practicing of witchcraft, verbal abuse and intimidation, severe assault and battery, murder and the abetment of her murder by the inaction of bystanders.

“As an organization concerned with the safety and protection of women, The Ark Foundation calls on the Inspector General of Police to ensure swift action towards the apprehension of the direct perpetrators of the brutal act and the bystanders; and bring them before the law courts,” the Ark Foundation said in a press statement signed by the Executive Director of the organization, Angela Dwamena-Aboagye, July 26.

They’re also calling upon the Commission on Human Rights and Administrative Justice (CHRAJ) to put more effort into the education of the public against human rights violations, “especially those that emanate from deep-seated negative cultural norms and practices, many of which undermine the protection of women’s rights in the country.”

“Violence against women no matter who perpetrated it is still a human right violation and must be treated as such,” the statement read.

They further called on traditional authorities and community leaders to act swiftly as law-abiding citizens and curb such incidents from happening within their communities.

“Traditional authorities and leaders should desist from shielding people who perpetrate such heinous and inhumane acts and report them to the police for the laws to take its cause,” they added.

DISCLAIMER: The Views, Comments, Opinions, Contributions and Statements made by Readers and Contributors on this platform do not necessarily represent the views or policy of Multimedia Group Limited.
Tags:
Lynching
The Ark Foundation
Witchcraft