Arsenal through after beating Dortmund 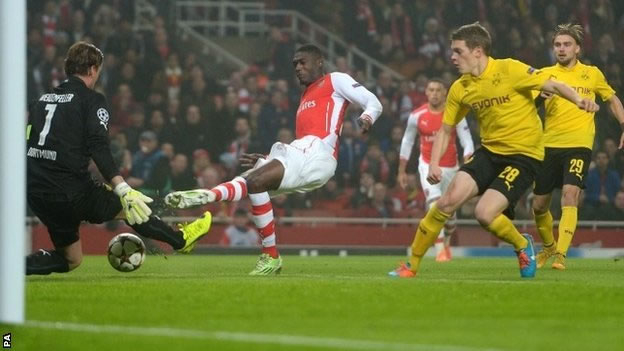 Yaya Sanogo scored his first goal for Arsenal as they defeated Borussia Dortmund and ensured their passage into the Champions League knockout stage.

The 21-year-old netted after 19 appearances without a goal when he finished off a one-two with Santi Cazorla with a low shot early on.

Alexis Sanchez made it 2-0 after the break with a superb low curling shot.

Sanchez also had a shot pushed away, while Alex Oxlade-Chamberlain struck the crossbar with a dipping volley.

It was a mature performance by the Gunners who, like their opponents, have found solace in this competition this season from the struggles of the domestic league.

They quelled the threat of Dortmund on the counter-attack, with Jurgen Klopp's side only seriously troubling keeper Emiliano Martinez once, in stoppage time.

The Bundesliga outfit had named a strong side despite having secured their berth with four wins from four games but before they had a chance to establish themselves at the Emirates, they were a goal down.

That was scored by a player who was the source of some ridicule on social media when the teams were announced before the match.

Sanogo's ungainly style has irked some fans and there was further astonishment when he was named ahead of Germany World Cup winner Lukas Podolski.

But he finally managed to temper some of that criticism when he converted his first effort after starting the move with a ball-juggle and backheel to Spaniard Cazorla.

With the Germans already qualified and Arsenal almost there, the tempo of the game was sedate at times, although the Gunners picked up the pace after the break.

First Sanchez tested the Germany international keeper Roman Weidenfeller with a low shot after battling past two challenges, before the pacy Oxlade-Chamberlain produced a beautiful volley that failed to dip enough.

They finally managed a second when Sanchez, who flitted in and out of the game, cut inside from the left and bent an effort that beat Weidenfeller's reach. It was the Chile international's seventh goal in his last six matches for the Gunners.

Martinez was finally forced to make a big save in stoppage time when he dived to keep out substitute Adrian Ramos's effort.

The win moves Arsenal to 10 points in Group D and a victory over Galatasaray coupled with Dortmund losing to Anderlecht in the final round of games would see Wenger's side go through as winners.