Arturo Vidal blasts referee over ‘robbery’ in loss to Real

Arturo Vidal called Bayern Munich's 4-2 second-leg loss to Real Madrid in the Champions League quarterfinals a "robbery" at the hands of referee Viktor Kassai, while adding it was the official, not Zinedine Zidane's team who had eliminated the Bundesliga leaders.

Carlo Ancelotti's side bravely secured the extra half-hour with a 2-1 win in regular time, courtesy of a Robert Lewandowski penalty on 53 minutes and a bizarre Sergio Ramos own goal 102 seconds after Cristiano Ronaldo had equalised for the holders with 14 minutes remaining.

Just like in the first leg in Munich, Bayern were reduced to 10 men. Vidal was shown a controversial second yellow card of the evening at the 84-minute mark and Ronaldo took advantage. He added two more goals in extra time to seal his hat trick, taking his tally to five in the tie despite the visitor's contention that he was offside for his last two strikes.

Vidal said: "It is very tough when they steal a game from you like that — two goals offside and me wrongly sent off. When two big teams meet like this in the Champions League, such a robbery cannot happen.

"We were 2-1 up in the game, they got scared, and the referee began his show. You could see it clearly, it was very ugly. Then the usual thing happened, a player less. And we began to doubt a bit.

"The dressing room is very sad, very angry. In a game of such intensity the result cannot be decided by the referee. The referee has eliminated us. Real did not know what they were doing. Everyone knows what they saw,"

Ancelotti agreed with Vidal in principle, saying the referee "had a bad night, full stop" after seeing his side bounced out of the Champions League 6-3 on aggregate. 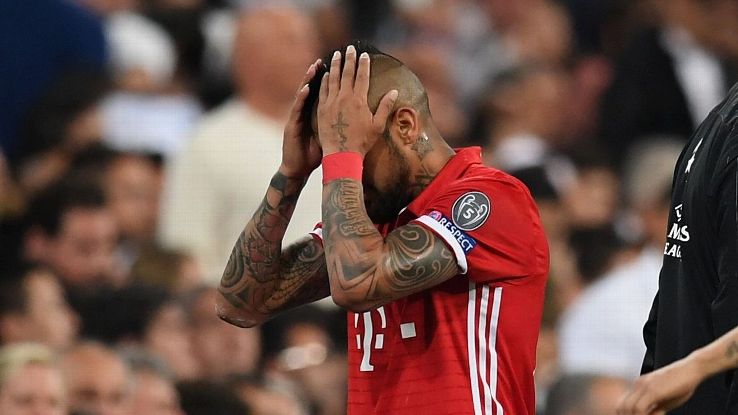 Asked about the match official's display, Ancelotti said: "The referee had a bad game. Full stop. He was worse than our performance."

Ancelotti said that he only told Kassai "good job" after the match.

"I am really proud. We had players that were not 100 percent but sacrificed everything," he said. "We played really well and were so close to the semifinals. We were penalised by some decisions from the referee. I know that this is football and sometimes it can happen. But not this series of mistakes.

"We played about an hour over the two games with 10 against Madrid, which is not very easy. We deserved it in first leg, not today. We have to accept it and go forward to win the Bundesliga, the Pokal, and next year we are back in the Champions League."

Referring to Ronaldo's final two goals of the evening, Ancelotti said the Portuguese was clearly offside for both, calling the missed calls "unbelievable."

CEO Karl-Heinz Rummenigge was also critical of Kassai's decision to send off Vidal with Bayern on the verge of extra time.

"The red card was the killer," he said. "It wasn't even a foul. The team is distraught, the referee made some curious mistakes."

Philipp Lahm, playing in the last Champions League match of his career called the defeat bitter.

"We showed courage and badly wanted to win, but we didn't have any luck with the refereeing decisions," Lahm said.