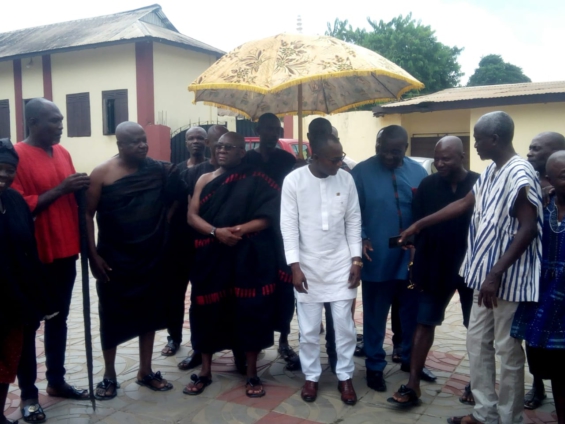 After protracted acrimony and clash of interest in the West Akim Municipality, the Tankamfo Fie and Asamankese Chiefs have extended an olive branch to the Municipality Chief Executive, Seth Oduro Boadu.

This happened during a symbolic gesture at the Asamankese Palace on 2nd August, 2022.

At a well-attended pacification ceremony at the Tankamfo Fie, the Chiefs led by Asamankese Gyaasehene Oppong Adease and Osabarimah Owusu Nketia, Takrowasehene and flanked by all the subchiefs of the Oboadwan Traditional Council symbolically slaughtered a sheep as tradition and custom demand.

They pacified the gods and retracted their earlier stance on 23rd January, 2021 when they cut off ties with the Municipal Assembly.

The re-establishment of friendship between the Traditional Council and the Municipal Assembly, and in particular with the MCE is viewed by residents, Chiefs and indigenes as a sense of exemplary leadership, progress, cooperation and unity, and above all a milestone.

Speaking to the press after the pacification at the Tankamfo Fie, one of the prime mediators of the negotiation towards ensuring a peaceful atmosphere in the corridors of the two leaders, Osabarimah Owusu Nketia, Takrowasehene stated “Okyeman doesn’t embrace division in its ranks. There is light at the end of the tunnel regardless of the forces, and am disappointed to say that people have twisted and filtered the whole story between the Asamankesehene and the MCE to meet their taste.

“But today after our meeting with the two leaders in the municipality, Osabarimah has made us understand that it was a clash of concessions, better still differences in direction all towards the developmental setting and strategy and that he has let gone any ill feeling and in pole position to collaborate with the MCE for the wellbeing of the municipality.”

Abusuapayin Kofi Kumah lll, one of the Kingmakers of the Asamankese royal clan couldn’t hide his relief and joy.

“I am really going to sleep and sleep well from today onwards. This misunderstanding has been an albatross over my neck my brother. Since the breaking of ties between the MCE and Osabarimah everything has become a stand still in the traditional administration. People were not regarding our authority and was really a worry to us. There were a lot issues we could have collaborated with the MCE in arresting but we had no means of doing so. Today will go down as a milestone not only in the history of this community, but under my tenure as well,” Abusuapayin Kofi Kumah Ill noted.

It would be recalled that before the reappointment of the Municipality Chief Executive, Seth Oduro Boadu, a group and some Chiefs vehemently opposed any attempts of the reappointment amidst several allegation primarily what they labelled as arrogance.

Some other groups including Centre for the Vulnerable, Concerned Youth of Asamankese, some religious leaders just to mention but few, also came to the defence of the MCE calling for his reappointment following unprecedented development he had embarked on.

This notwithstanding, some Chiefs of Asamankese on 23rd day of January at the Asamankese palace announced symbolically to the entire nation of their willingness to halt any ties with the MCE on grounds of abysmal performance and gross insubordination. They slaughtered a sheep to the gods to that end .

DISCLAIMER: The Views, Comments, Opinions, Contributions and Statements made by Readers and Contributors on this platform do not necessarily represent the views or policy of Multimedia Group Limited.
Tags:
Asamankese Chiefs
Municipality Chief Executive
Seth Oduro Boadu