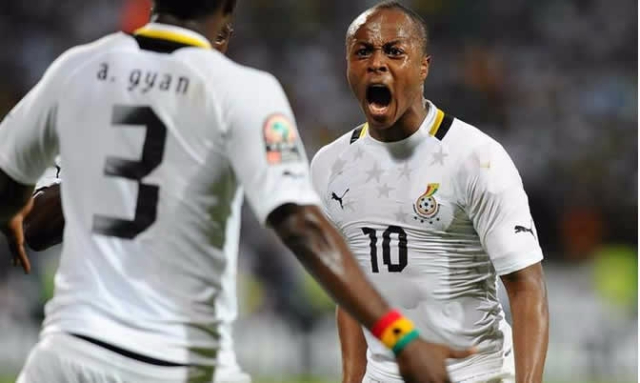 Ghana captain Asamoah Gyan and his deputy Dede Ayew will go head-to-head for the 2015 Ghana Sports Personality of the year award.

The sports personality of the year is the flagship category of the annual SWAG awards which rewards sportsmen in Ghana. Andre Ayew has been nominated for his role in helping the Black Stars reach the finals of the Nations Cup in Equatorial Guinea and based on his superb start to life in English football with Swansea.

Gyan had little moments with the Black Stars of significance except for his moment of magic against Algeria at the Nations Cup. Basygyi meanwhile supervised the failure of the Black Queens to qualify for both the Olympic

Games and African Women's nations cup before helping them win gold at the All Africa Games by winning one game in regulation time. The last name on the list is Bashir Hayford whose AshantGold side finally ended a 19-year wait for the domestic league title.

The four contenders for sportsman of the year are all also nominated in other categories too. Dede and Gyan are all both in contention for footballer of the year too with Harrison Afful the third name in the frame.

Bassigyi and Hayford have alse been nominated for coach of the year with Golden Rackets coach Henry Quansah their main competitor.

The All Africa Games provided the basis for nomination of a lot of the athletes but in a year when high achievers were few, there are bound to be major question marks over some of the nominations.

SWAG is determined however to hold the ceremony as soon as possible as it seeks to re-position it as the most credible sports awards in Ghana.

Sports Personality of the year

Footballer of the year (Male)

Footballer of the year (Female)

National Team of the year

Coach of the Year