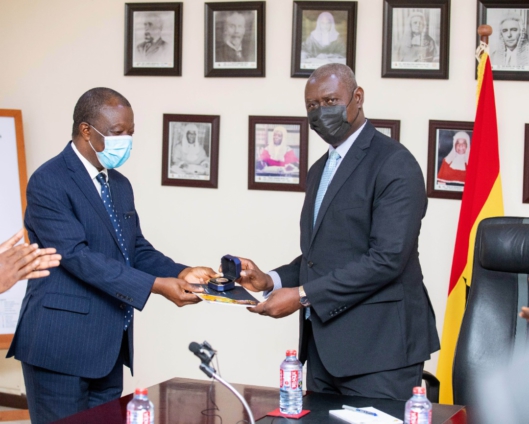 Chief Justice, Justice Kwasi Anin Yeboah says the Asantehene, Otumfuo Osei Tutu II is a role model for some members of the judiciary.

Receiving the Otumfuo commemorative gold coin at his office in Accra on Wednesday, February 9, 2022, the Chief Justice said over the years, the Asantehene had settled many land disputes in a fair manner, which has reduced the workload of the courts.

“When he ascended to the Golden Stool, there were several land disputes in court and he made it clear that he was not going to endorse a chief who was involved in the double sale of land and his efforts are very commendable and I wish that some other traditional rulers may also emulate him and also continue to assist the judiciary,” Justice Anin Yeboah stated.

His Lordship, Justice Anin Yeboah is the fifth selected personality to receive the gold coin.

Justice Anin Yeboah said currently, many of the cases in the courts were related to land disputes.

“Beyond the fact that they [ land cases] prevent people from investing in the country, they also bring down the development of the country. So if we have somebody who is very fair in bringing some of these disputes to the early solution, he needs all the support to do more,” he said.

Justice Anin Yeboah also thanked the delegation for the honour of presenting the gold coin to him.

The Chief Justice said the judiciary was fully aware of the importance of peace because, without peace, the nation can not progress.

“This is why Otumfuo’s peace-building efforts must be commended. We appreciate his efforts in bringing peace to endemic disputed areas especially the Dagbon one and the efforts he is making in other areas to bring peace to the country,” the Chief Justice added.

The General Manager of E ON 3 Group, Mr Jesse Agyepong, who spoke on behalf of the delegation, thanked the Chief Justice for gracing the launch of the gold coin occasion in Kumasi.

He emphasised that the foundation for the gold coin was grounded in the award Otumfuo received on December 29, 2019 as the Pillar of Peace at the Africa Premiership Award.

“The foundation of that award is the leadership role Otumfuo played in bringing finality to the Dagbon conflict. He and the other members of the Committee of Eminent Chiefs did an excellent work,” he stated.

Otumfuo’s peace initiatives, he noted, also manifested in the resolution of the Techiman dispute over the Tano Subin towns as well as the KNUST crisis, and some of the difficult political terrains the country went through particularly in 2012 and 2016.

“All this culminated in his invitation to the UN General Assembly High-Level Forum on Culture of Peace as the Guest of Honour, he spoke on his ability to use traditional methods and culture to engender peace in the Asanteman and Ghana as a whole.”

The delegation to the Chief Justice’s office was led by Mr Richard Adjei Mensah Ofori Atta, the Executive Chairman of the E ON 3 Group. The other members were Mr Paul Asimenu, Legal Advisor of Gold Coast Refinery, Mr. Olumide Olatunji , Managing Director of Access Bank and Mrs Yvonne Antonio, Head of Retail Banking for Access Bank.