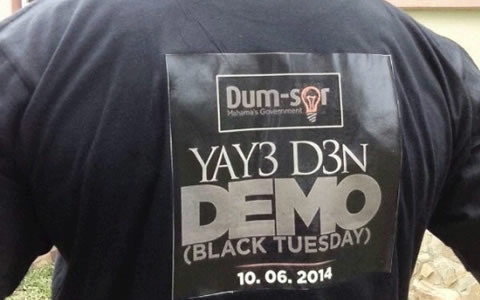 The Ashanti Regional branch of the New Patriotic Party (NPP), in collaboration with the Ashanti Regional Parliamentary Caucus, will today hold a massive demonstration in the Kumasi metropolis to register the party's displeasure and abhorrence at the increasing hardships in the region.

Dubbed “Ya Ye Dien?”, which literally means: “What Have We done?,”  today’s demonstration is also against the failure of President Mahama-led ruling National Democratic Congress (NDC) to fulfil the plethora of promises it made to Ghanaians in the run-up to the 2012 presidential election.

It is expected to attract all the Members of Parliament (MPs) from the region, all aspiring presidential candidates of the party, and the national executive members of the party.

Briefing the Daily Graphic, the Ashanti Regional Organiser of the NPP, Mr Kennedy Kwasi Kankam, said the party was troubled by the deliberate moves to make life unbearable for the people in the region.

He, therefore, urged all residents in the region who have been affected in one way or another by the happenings in the country, especially the economic hardships, unending power cuts and capitation under the National Health Insurance Scheme, to participate in the peaceful demonstration.

He explained that although the country was going through turbulent economic hardships, the region was bearing a disproportionate portion of the suffering.

He mentioned the rampant and unannounced power cuts in the region which was collapsing businesses and said it was worse than what other regions were experiencing.

Mr Kankam alleged that enquiries by the party had also indicated that certain regions were not experiencing  the same quantum of power cuts irrespective of the fact that their prices per unit of electricity were lower than that of Ashanti Region.

He wondered why electricity generated from the same sources would be priced differently in certain areas, while those who pay more were rather made to suffer more power cuts than those who paid less.

He said the party had concluded every discussion with the Police Command in the region and had agreed on the route.

He said the demonstration would start from the Suame Roundabout through Abrepo Junction, Bantama High Street, Komfo Anokye Roundabout, Pampaso,  the Prisons Roundabout, Melcom and Asafo Interchange to Abbey’s Park.

According to Mr Kankam, the demonstration would be addressed by regional and national party leaders.

In a related development, a statement jointly signed by the Ashanti Regional Secretary of the NPP, Mr Samuel Pyne and the Chairperson of the Ashanti Caucus of Parliament, Elizabeth Agyeman, said “since this government, for reasons best known to it, has decided to turn a deaf ear to the plea of the people, it has become necessary that we pour out our frustration through this demonstration.”

According to the statement, “hardly does a day pass in Kumasi without continuous power outages. The intensity of what has come to be known as ‘dumsor’ in the Ashanti is mind-boggling.”

The statement recalled that President Mahama had stated that “load shedding shall be a thing of the past” but expressed worry that the country was bracing up for a worse energy situation.

Another group calling itself the Concerned Citizens of Ashanti Region are also poised to hit the principal streets of Kumasi today in a peaceful demonstration against the Electricity Company of Ghana (ECG), the Volta River Authority (VRA), Ghana Grid Company Limited (GRIDCo) and PURC over what it calls “excessive power outages in the region”.

A statement signed by its PRO, Odehyieba Kwabena Amofa Ababio, affirmed the decision of the group to join the NPP and any political party which supported its cause.