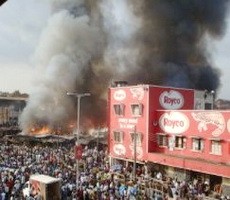 The Ashanti Region recorded a total of 515 fire disasters during the first half of the year, resulting in the loss of property valued at more than GH¢2.5 million.

Mr Kwaku Aninkora-Sie, the Regional Coordinator of the National Disaster Management Organization (NADMO), said majority of the fires were domestic and industrial.

These, he said, from the research they conducted, were mainly caused by the use of inferior quality electrical cables.

Mr Aninkora-Sie said this when addressing a public forum on disaster management held at Foase in the Atwima-Kwanwoma District.

The event was organized by the NADMO to educate and encourage the people to join in the efforts at preventing disasters.

Mr Aninkora-Sie identified wildfires, domestic and industrial fires, social conflicts and collapse of buildings as the main disasters the nation had over the years been forced to tackle.

He, however, warned that the country could be hit by a major disaster including an earthquake because of the changing climatic and geological conditions.

He underlined the need for preventive actions to assure the people of their safety adding that Civil-society Organizations should also take up courses in disaster management.

Mr Tony Nyame, the District Chief Executive, said the forum could not have been held at a more opportune time, given the extreme weather conditions and the nature of disasters the country had been experiencing in recent times.