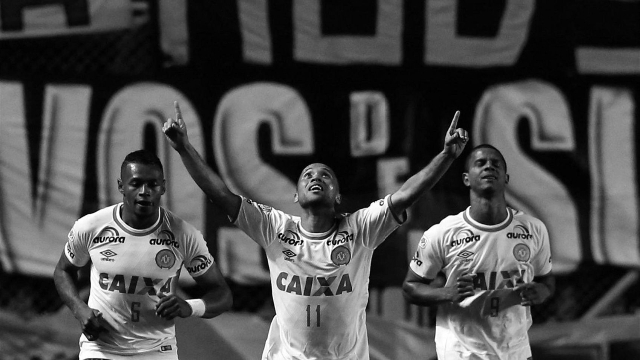 Colombian football team Atletico Nacional have offered the South American Cup to Chapecoense after the Brazilian club’s plane crash tragedy, while other Brazilian clubs have called for Chapecoense to receive free loan players for 2017 and to be exempt from relegation for the next three seasons.

The majority of the Chapecoense playing staff and many of the coaching and backroom staff were among 76 fatalities when a plane – which had been taking the team to play Atletico Nacional of Medellin in the first leg of Wednesday's Sudamericana final – crashed in Colombia on Tuesday.

Tributes have poured in from across the world of football.

And Brazilian journalist Paulo Freitas is reporting that Atletico Nacional have asked the South American Football Confederation to award the trophy to Chapecoense.

This season was the first time in the Chapecoense’s history that they had reached the now-cancelled cup final and Atletico Nacional have called for mourners to attend the stadium dressed in white and carrying a white candle in a “symbol of solidarity”.

Corinthians released a statement on Tuesday in which the collective presidents of Brazilian clubs expressed their “most sincere condolences and solidarity to Chapecoense Football Association and its fans”, while recognizing that this is a “time of unity”.

Among the initial measures suggested will be free loan of players to the tragedy-struck club in 2017 and a formal request for Chapecoense to be exempt from relegation from the top-flight for the next three seasons.

The statement added that these measures were “a minimum gesture of solidarity that is at our disposal at the moment”, while promising to support the club after its tragic loss.