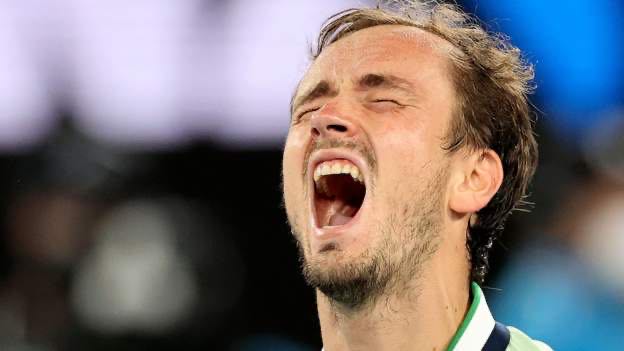 Now Tsitsipas has the opportunity to avenge that defeat against the Russian and reach his first Australian Open final.

Medvedev, 25, is aiming to go one step further than last year when he lost the final to Serbia’s Novak Djokovic, who has not played at Melbourne Park this year.

Djokovic was deported from Australia after his visa was revoked because he was unvaccinated and the world number one’s absence opened the path for one of his younger rivals.

US Open champion Medvedev has taken over the mantle of favourite for the men’s singles, but played far from his best in the opening two sets against Auger-Aliassime.

Eventually Medvedev found his level as the 21-year-old Canadian – aiming for his first Australian Open semi-final – found the Russian harder to break down.

A tight third set went Medvedev’s way in the tie-break, which was stopped for six minutes with the score at 2-1 as the Rod Laver Arena roof was closed with rain falling in Melbourne.

Ninth seed Auger-Aliassime earned his match point at 5-4 in the fourth set, but it came and went very quickly.

Medvedev thumped down a 132mph ace to keep the contest going, backing it up with two more hefty first serves to hold before breaking his opponent and serving out to level the match.

After surviving three break points in the second game of the decider, Medvedev then broke for a 2-1 lead before Auger-Aliassime needed treatment on an ankle injury.

The interruption did not upset Medvedev’s rhythm as he held to love for 4-2, only for a double fault to hand an unexpected break point to Auger-Aliassime in the eighth game.

Medvedev raised his arms to the air while running backwards to the net, having clinched a memorable win after four hours 42 minutes at almost 12:30am local time.

Asked how he won, Medvedev said: “I have no idea.

“Talking about the match point, I managed to serve well. If I had a second serve who knows what would have happened.

“I was not playing my best. Felix served unbelievable; I was all over the place.

“Then, I thought to myself, what would Novak do? So I said ‘I am going to make him work’.

“I managed to raise my level and when they closed the roof I was able to go through momentum and I started playing better.”

Sinner, 20, failed to earn a break point in the match.

Tsitsipas wrapped up the opening set in 36 minutes and broke early in the second with a superb array of groundstrokes before the rain began to pour in Melbourne.

That meant the roof needed to come on, and the court be towelled down. But after an 18-minute break the players returned and Tsitsipas picked where he left off to close out the set.

Sinner was aiming to follow compatriot Matteo Berrettini, who progressed on Tuesday, as the first Italian man to reach the Australian Open semi-finals.

But he was unable to lay a glove on the Tsitsipas serve and it was the Greek who again broke early in the third, teeing up the moment with a stunning backhand winner.

Tsitsipas immediately broke again and clinically polished off the victory to progress in two hours six minutes and continue his pursuit of a first Grand Slam.

“I am very, very happy with the way I served today and used my tactics,” said Tsitsipas, who was also pleased with how he adapted to the roof closing.

“It is part of the game. You never know what to expect from the weather. I knew I was heading towards the right direction.

“The conditions might have changed a little bit – slightly faster, not as bouncy – so my mind did. I tried to adapt and it just worked.”