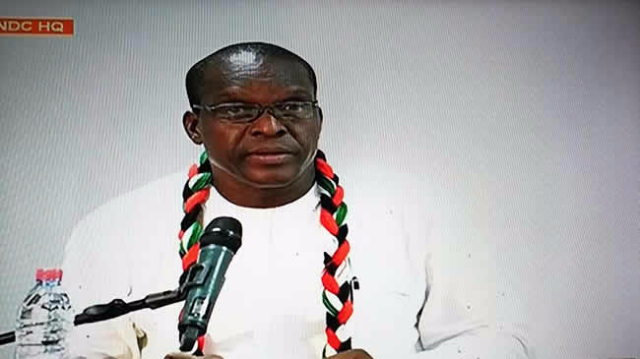 Second Deputy Speaker of Parliament, Alban Bagbin has said any talk about his presidential ambitions must wait until the National Democratic Congress is re-organised.

The NDC's most experienced sitting MP said his focus is to repair the damaged party morale following a humiliating defeat in the 2016 general elections which returned the governing party into opposition.

MP for Nadowli-Kaleo, speaking on the sidelines of a public lecture on "25 Years of Parliamentary Democracy in Ghana" in the Volta Regional capital, Ho said, he believes the NDC is experiencing what he describes as the "five stages of grief".

Known as the Elizabeth Kubler-Ross model, the stages are denial, anger, bargaining, depression and finally acceptance.

Bagbin did not state the stage the NDC has reached after suffering the heaviest political defeat in its 25 years of political existence.

The veteran politician took to proverbs and parables to explain the state of the party and that of his ambitions.

He said seeds "can only blossom in fertile soil..so before you go to sow the seeds, you have to first look at the soil".

Bagbin said he would leave the final determination of his ambitions to God. The lawyer has been in parliament since 1993, held both the Majority and Minority leader positions in parliament.

Finding the next NDC flagbearer is fast becoming a game of chess with former President John Mahama said to be interested in a return.