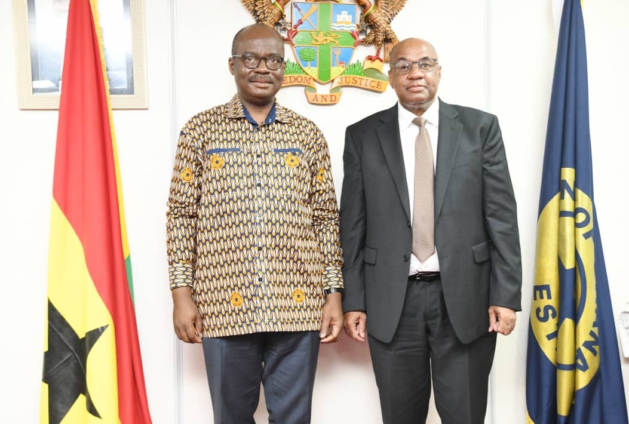 In his introductory remarks, the Governor of the Bank of Namibia, Johaness !Gowaxab, eulogised Governor Addison for his sterling performance and congratulated the Bank of Ghana for winning the Central Banking’s FinTech Policy of the Year Award 2022.

“Allow me to congratulate you, Governor, on your stewardship of this noble institution. The awards, including one this week – the Central Banking Magazine Fintech Policy of the Year, are more than just accolades under your belt; they serve as a beacon of hope and inspiration for the rest of us on the continent. Once again, congratulations”, Johaness !Gowaxab said at the meeting.

On the areas of co-operation, Governor !Gowaxab mentioned that, they intend to collaborate with the Bank of Ghana to enhance co-operation in the area of financial inclusion, digital innovation in financial services including Central Bank Digital Currency, FinTech Regulation, Management of Petroleum Funds, Financial Stability and Banking Resolution issues.

“You have innovated by providing practical solutions such as Ghana Pay which you launched this week as a mobile money service. Furthermore, your courageous move to explore CBDCs as a critical intervention to balance the interests of all economic agents is something worth learning from”.

“Governor, you will be pleased to learn that Namibia has just launched the transformative Welwitschia Fund – our Sovereign Wealth Fund. Ghana has a similar Fund, which is run by the Bank of Ghana and overseen by the Ministry of Finance and Parliament. We need to compare notes on the ideal governance and legal framework because our Fund will be managed by the central bank as well – a function delegated to us last month”, he added.

On his part, the Governor of the Bank of Ghana, Dr. Ernest Addison, remarked that the current management of the Bank had initiated and implemented various policies since assuming office including the banking sector reforms, the introduction of mobile money interoperability and the Central Bank Digital Currency(CBDC), which is currently in a pilot phase.

He noted that, the Bank had been critical in the development of the country.

“In Ghana, the central bank has to play an agent of restraint in the system. This is why we have seen stability”.

Dr. Addison expressed concern about the effects of the Covid-19 pandemic and the Russia-Ukraine War, which has led to high inflation and policy rate being increased by the central bank.

He also recounted the role that, the mobile money interoperability had played in promoting financial inclusion in Ghana and the hope that, the eCedi when launched would further enhance this agenda.

He reiterated the need for central banks in the sub-region to exchange ideas and grow to be an influential part of the global financial architecture of the world.

In Governor Addison’s team were the Head of the Research Department, Dr. Philip AbraduOtoo, the Special Assistant to the Governor, Emmanuel Kinful,  Oriana BoaduAmoama, Richard Homiah and Freda Mensah of the Governors’ Department and Samuel Opoku of the Communications Office