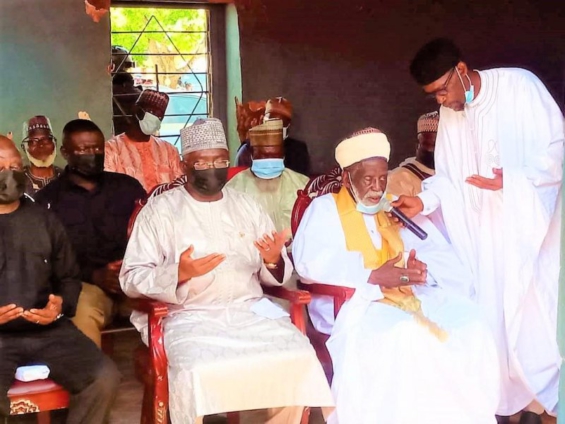 The Vice-President, Dr Mahammudu Bawumia, has donated 1,000 bags of cement and cash of ¢50,000 towards the construction of a Police Divisional Office at Ejura in the Ashanti Region.

The project is designed to resource the police to enhance security in the area.

It comes in the wake of the recent violent clashes between some youth in the area and security personnel, leading to the death of two people from the Dagomba-Line Muslim Community.

Dr Bawumia, who was on a visit to Ejura on Friday, July 02, was accompanied by the National Chief Imam, Shiekh Dr Osman Sharabutu.

On his part, the National Chief Imam also donated 500 bags and ¢2,000 towards the project.

In a speech read on his behalf, he said the Muslim community was praying for the souls of the deceased men.

He advised the youth and affected families to exercise restraint as government had commissioned a Ministerial Committee to probe the issue.

Nasiru Yussif and Murtala Mohammed, both in their 20s, were buried in line with Islamic tradition on Tuesday evening.

The violence leading to the shooting incident and subsequent demise of the two men was triggered by the death of one Ibrahim Mohammed, alias Kaaka, 45, who was said to have been brutally assaulted while returning home on a motorbike on Saturday night.

He died at the Komfo Anokye Teaching Hospital (KATH) three days after the attack, after his transfer from the Ejura Government Hospital.

What was expected to be a peaceful demonstration on Monday, following the burial of Kaaka, turned violent as the protesters clashed with the security personnel detailed to maintain order, resulting in the deaths of the two young men.