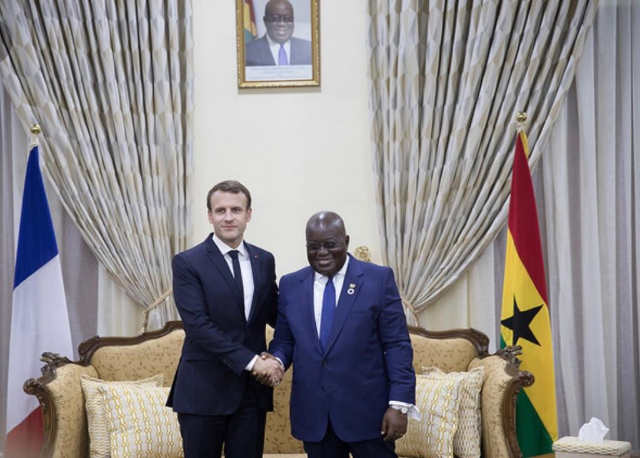 When French President Emmanuel Macron arrived in Ghana on an official visit on 30th November, 2017; his counterpart and host, President Nana Addo Dankwa Akufo-Addo as part of the agreed itinerary ushered his special guest to a media engagement at the seat of Government.

That press encounter was perhaps President Akufo-Addo's best performance before the international media. His impassioned remarks about the new kind of leadership and mindset change Africa requires in this era made him the toast of many international observers along with an army of young Africans who took to social media to pay their compliments after watching that particular video which was a viral hit. I dare say it was a proud moment for all Ghanaians.

Away from the cameras and the microphones set up for that day, many were those who expected concrete action to follow the lofty rhetoric especially on the part of the much older Akufo-Addo (old enough to be Macron's father); alas, the jury's verdict 16 months thereafter has been nothing short of an anticlimax in comparison with the hope of that moment.

Rather fortuitously, a look at the domestic landscape in both nations highlight parallels in President Macron's France and President Akuffo-Addo’s Ghana that also present fascinating contrasts.

President Macron's former personal bodyguard and high ranking security officer at the Elysée, Mr. Alexandre Benalla who was caught in a video assaulting protestors (hitting a man with his fist and dragging a woman) during a May Day rally in 2018 was made to account for his actions. He was initially suspended and demoted. When it was later revealed that Mr. Benalla had sought to obtain video footage from police records in order to obstruct justice, he and the three police officers who conspired with him were summarily dismissed even before a Parliamentary inquiry Benalla had appeared before would conclude its investigations.

Benalla also faces charges of assault, impersonating an officer, and illicitly receiving CCTV recordings of the May Day incident.

This is what President Macron said in an address to his MPs of the majority Republic on the Move (LREP) during the scandal: “If they are looking for the person responsible, the only one responsible is me and me alone,” he continued: "What happened on May 1 is terrible, serious, and for me it was a disappointment and a betrayal by someone I had mistakenly trusted."

"Benallagate" as the scandal is known in France was revived in December last year when French intelligence discovered that the 27 year old Alexandre Benalla who has now relocated to London and reinvented himself as a "consultant" has traveled to at least 10 African nations using a French Diplomatic Passport.

Mr. Benalla is now known to have met the presidents of those 10 African nations including the presidents of Cameroon, Chad and the DRC on various matters relating to arms and oil deals. (By the way, see how easy it is for foreign nationals of doubtful credentials to meet with many African Presidents).

Now guess what, the French Foreign Ministry has opened a judicial inquiry on how Mr. Benalla continued to use French diplomatic passports when he had been written to twice to return them. What is perhaps more impressive is the letter the Macron Administration wrote to Mr. Benalla and copied the international media for the attention of all Governments especially those found on our continent. The December 22, 2018 letter signed by Macron's office chief, Patrick Strzoda warned the former bodyguard against divulging any confidential information gleaned during his previous job at the French president's side.

"Let us be clear: we forbid you from claiming you have any kind of recommendation or tacit support from the presidency," Strzoda wrote.

"With regard to your current personal activities, we ask you to ensure they are conducted with strict respect for the confidentiality and ethical responsibilities of your time in this office," the letter concluded.

In contrast with Ghana, despite the national embarrassment of the Ayawaso West Wuogon by-election where Ghanaians including an MP were shot at and brutalized; and despite Minister of State for National Security Bryan Acheampong publicly owning up for the bloody deployment that was a scene of gross human right violations, not a single person has been made to account. A grudging decision announcing a circuitous Commission of Enquiry after overwhelming national outrage appears preferred by the Akufo-Addo administration over bringing known perpetrators caught on video to swift justice.

Then there is President Akufo-Addo's own Banalla – a former personal bodyguard called Nana Wireko Addo nicknamed "Choman" who is mysteriously able to secure two offices at the Osu Castle – the former seat of Government now home to at least five Ministries. As courageous journalist Manasseh Azure Awuni reveals, "Choman" describes himself as the Commander of De-Eye Group. His bravado is legendary as he manages to turn a prominent State facility into multiple business operations that's depending on who in Government is speaking: some say he was operating a recruitment agency; some say a private security firm, albeit unlicensed; some say a keep fit club; and others a prayer group probably reminiscent of the Lord's Resistance Army in Uganda. Don't forget others like the Director of Communications at the Presidency, Mr. Eugene Arhin had said De-Eye did not exist at all. It certainly doesn't get more ridiculous done that.

Commander "Choman" even had the temerity to present the Christianborg Castle on his unlicensed security company website as though he had bought the high stakes State facility and now owns it.

So unlike in France, the loyalties are to the President's former bodyguard and not to the State. In the process, we don't even mind degrading the Christiansborg Castle and making it akin to a free gym open to the general public and keep fit clubs 24/7, even though, Ministries of State continue to function from that high security historic edifice.

It is only in Ghana that our Ministers are provided armed bodyguards from the Ghana Police Service and the Ghana Armed Forces everywhere they go including in their homes only to end up in their allocated offices in the Osu Castle which Government wants us to believe is an ordinary museum that has no security cover whatsoever and therefore open to members of the general public without restrictions. What an interesting country and what a sad reflection of what the Government thinks of us.

President Akufo-Addo's Nana Wireko Addo who in comparison may be said to have less influence than Benalla because he was laid off by Akufo-Addo in 2010 and was not in charge of the presidential security detail as Benalla was even though it must be noted that "Choman" was still trusted enough to be appointed by President Akufo-Addo as a member of a task force responsible for retrieving properties of State from erstwhile functionaries; perhaps the reason he remains untouchable. No one dares arrest "Choman" though everybody agrees he has broken multiple laws including operating a so-called security firm without license. Let any exuberant law enforcement officer attempt arresting the "Choman" and s/he will have no "cho" for the rest of his/her life.

In France, President Macron took personal responsibility and continues to ensure Benalla is brought to justice even though with all these admirable efforts he still faces some criticism from the French opposition. Here, President Akuffo-Addo refuses to respond directly to the allegations especially those relating to the fact that Commander "Choman" and his "Chief of Staff" are heard on tape claiming to provide regular updates on De-Eye's progress to Ghana's Commander-in-chief.

As he has done in this instant case and on the larger issue of disbanding all party militias, President Akufo-Addo has conveniently abdicated, passing the buck to party executives as though there is a Gulf of Guinea between Presidents and the parties that bring them to power. A clear sincerity and leadership deficit!

Sixteen months after the Akufo-Addo/Macron media encounter here in Accra, it is unmistakable that one nation upholds higher standards and less talk as compared to the other which is drowning in hypocrisy and profuse duplicitous rhetoric.

That said, we all have a duty to ensure that this country is not destroyed by political violence. The antecedents of Boko Haram, currently considered one of the deadliest terrorist organisations in the world should be our guide. Let our anger and revulsion drown the voices of reckless violent politicians.

Additionally, I would humbly suggest that all colleague MPs declare our constituencies no vigilante/militia zones and we should vigourously resist any attempt to have our young constituents recruited by war lords.