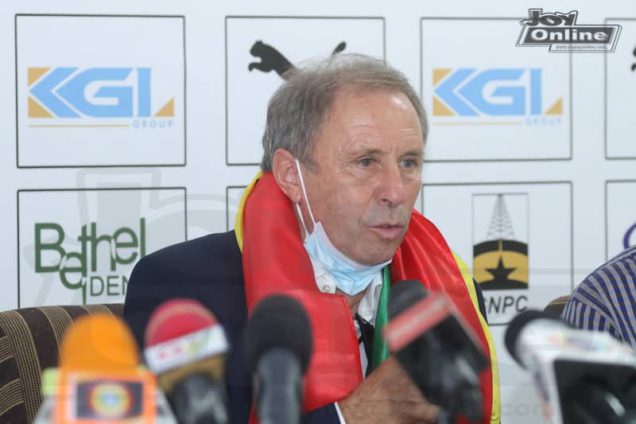 A leading member of the governing New Patriotic Party (NPP), Gabby Otchere-Darko, is convinced that coach Milovan Rajevac should be reprimanded by the Ghana Football Association (GFA) for the Black Stars’ early exit in the 2021 AFCON tournament.

Mr. Otchere-Darko has noted that comments made by Mr. Rajevac after the senior national soccer team got kicked out by Comoros on Tuesday, reflect his ill-preparation towards the Africa Cup of Nations.

Following the Black Stars’ loss, Milovan said he will not leave his post despite the team’s exit.

In his post-match conference, he said: “I will stay and lead Ghana in the World Cup qualifiers in March. I believe we have a team that can become stronger and get to the World Cup.

He told Ghanaians that he has handled the team for just three and a half months, hence “don’t expect magic.”

But according to Mr. Otchere-Darko in a tweet, the utterance made by the coach is rather unfortunate as it shows his lack of seriousness.

“I will not resign, because I came here to take Ghana to the World Cup.” The unfortunate words of Coach Milo. These words alone confirm that the Serb didn’t approach the AFCON tournament with the seriousness expected of a national coach.”

“I will not resign, because I came here to take Ghana to the World Cup.” The unfortunate words of Coach Milo. These words alone confirm that the Serb didn’t approach the AFCON tournament with the seriousness expected of a national coach. He doesn’t deserve the sympathy of the GFA

He, therefore, said “he (Milovan Rajevac) doesn’t deserve the sympathy of the GFA”.

Meanwhile, former President of the GFA, Dr. Nyaho Nyaho Tamakloe and the Member of Parliament for North Tongu, Samuel Okudzeto Ablakwa, have called for the disbandment of the current Black Stars team and the sacking of coach Rajevac.

“The first thing is to dissolve it entirely and look for a new competent coach,” Dr. Tamakloe said on Joy FM’s Super Morning Show on Wednesday.

In a Facebook post, Mr. Ablakwa noted that, “the team must be immediately dissolved, the coach sacked, and a full-scale national public inquiry launched into why Ghana football is in such a sorry mess. Ghana’s day of self-inflicted international shame!”

According to Mr. Ablakwa, this must be done immediately as “the current team is not formidable to even come up against the Female Keep Fit Club in North Tongu.”