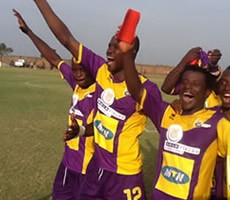 Medeama boosted their chances of reaching the group stage of the CAF Confederation Cup after a 2-0 win against Zambia's Zesco at home.

Goals by Nathaniel Asamoah and Michael Helegbe in either half at the Essipon Stadium on Sunday secured the Mauves victory.

Carlos Roberto Paulette will be hoping Medeama, who travel for the return at the Levy Mwanawasa Stadium in Ndola on March 29 will come good against the three-time Zambian champions.

Asamoah scored the opener in the first half before Helegbe doubled their lead from the spot after the break.

Medeama must secure an aggregate victory over Zesco and await whichever Champions League side that drops to the Confederations Cup in the final qualifying round.