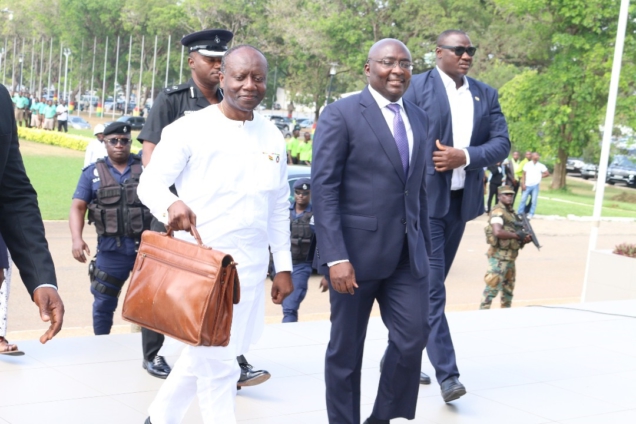 The CEO of the Chamber of Bulk Oil Distributors (CBOD) has praised Vice President Dr Mahammudu Bawumia and Finance Minister-designate, Ken Ofori Atta for stepping up and playing active roles to plug national revenue loopholes in the petroleum industry.

According to Senyo Hosi, the evasion of tax by some operators in the industry cost the nation about $1.9 billion in lost revenue which could have been used to provide much-needed social services and bolster the national economy.

He noted that even though successive governments have failed to live up to their promises to help address the issue, especially with regards to illegal fuel trading, Dr Bawumia and Mr Ofori-Atta have contributed remarkably to efforts to stem the tide.

“The whole industry is going haywire; and it is because of politicians, security officials, industry players and regulators. And there are ways to deal with it but very little commitment.

“But God bless Bawumia. He really pushed for us to get this done,” Mr. Hosi said in an interview on Joy FM.

Mr. Hosi believes the money the country has lost in potential revenue could have plugged the fiscal deficit the government is trying to address with the introduction of new taxes in the 2021 budget.

He said government needs to rather focus on plugging revenue loopholes, pointing out that if this had been done the ordinary Ghanaian would have been saved from having to pay for the free water and electricity enjoyed at the height of the Covid-19 crisis in 2020.

“It is possible that we can recover some sums. That is if we are willing to recover funds. But the difficulty in recovering funds is that the government will have to arrest its own people,” Mr Hosi said.

Mr. Hosi commended the Vice President and the Finance Minister for both their singular and joint efforts to eradicate illegal fuel trading, which he insisted is costing the country a lot of money in lost revenue.

“The Vice President and the GRA and the Minister of Finance pushed for a certain audit to be done at GRA. Ernst and Young is leading the charge on that. They have established that even the estimate that was put up was even an understatement. There is data required right from the same space to be able to narrow in on a few things,” he said.

“I have faith in the Finance Minister. I just hope that this time that it is the last term of President Akufo-Addo, he would be a lot more ruthless with some of these things because there is too much political pressure coming from all kinds of quarters and he has a very dire fiscal situation to manage.

He must come with full energy and ruthlessness – ruthlessness even against his own Presidency to be able to deliver. That is the kind of orientation required to win this war because this is a state capture situation.”