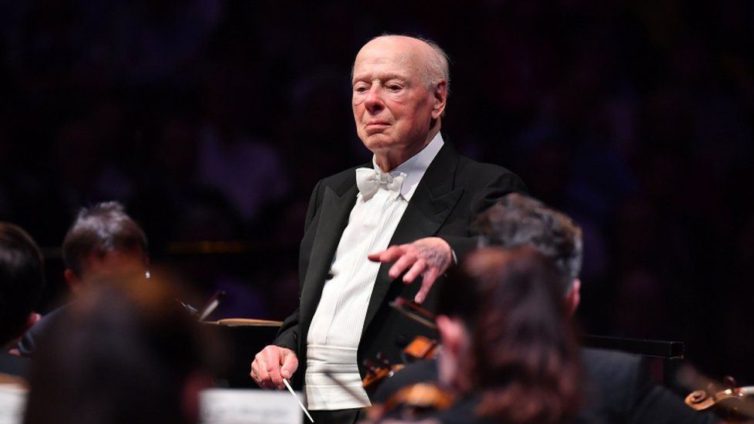 Bernard Haitink performed at the London Proms in 2019

Renowned Dutch conductor Bernard Haitink has died at his home in London aged 92.

He led the world’s top orchestras in London, Amsterdam, Chicago and Dresden, in a career spanning 65 years.

Born in Amsterdam in 1929, Haitink won many awards and was a major figure in the UK’s classical music scene.

Even in his final months at the podium his performances with the London Symphony Orchestra were described as “ravishing”.

Haitink made more than 450 recordings and saw his job as to embrace the orchestra without suffocating them.

His management company announced his death late on Thursday night, saying that one of the most celebrated conductors of his generation had died peacefully at his home.

It was in the Netherlands where Bernard Haitink forged his reputation as a conductor, starting his musical career as a violinist after spending much of his childhood under Nazi occupation.

His big break came with the Netherlands Radio Philharmonic and within six years he was asked to take charge of the Concertgebouw Orchestra in Amsterdam.

For 27 years he was chief conductor, famed for his performances of Mahler and Bruckner. The Concertgebouw said on Friday it mourned the loss of its “beloved, honorary conductor”.

“When he takes up the baton it’s as though the electricity is switched on,” his wife Patricia once said. “When it’s over he’s confronted with himself again.”

Haitink performed with almost all of the world’s big orchestras, notably in the UK with the London Philharmonic, Royal Opera and Glyndebourne Festival Opera.

The Royal Opera House said he was best known during his period there from 1987-2002 for his interpretation of Wagner. Chief Executive Alex Beard spoke of a true gentleman whose “quiet authority and profound care and respect for his fellow artists inspired and moved beyond words”.

Haitink’s first Prom at the Royal Albert Hall was Bruckner’s 65-minute Seventh Symphony in 1966, and 53 years later he performed the same symphony there for the last time.

Haitink was well known in the US for his time at the Chicago and Boston Symphony orchestras and in Germany for leading the Staatskapelle Dresden and the Berlin Philharmonic.

Staatskapelle chief conductor Christian Thielemann said on Friday he was “one of the most important conductors of our time”.

The Dutch royal family said in a statement that Haitink’s “drive and musical finesse are unforgettable”, revealing the soul of composers such as Mahler, Bruckner, Beethoven and many others.