Central Regional House of Chiefs vows to be more development-oriented 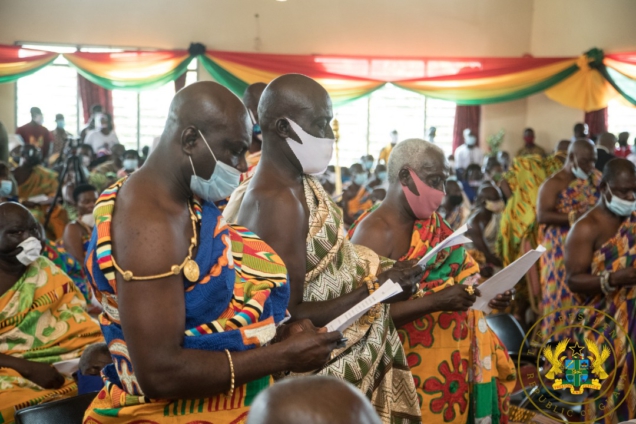 The Central Regional House of Chiefs says it wants traditional authorities in the region to focus more on the development of their communities. This approach, it believes, will help develop the region, thus change its classification as poor, to being one of the wealthiest regions in Ghana.

Speaking at the maiden meeting of the House of Chiefs in Cape Coast, President of the Central Regional House of Chiefs, Odeefuo Amoakwa Boadu VIII, said chiefs play active roles in the development of their communities and the people they represent.

“It is our plea that the critical roles we play as far as the socio-economic development of our various jurisdictions is concerned, are recognised. We are not happy when the region is categorised as one of the poorest regions in the country,“ he said.

He explained that the numerous chieftaincy disputes in the region have been a major concern to them and steps are being taken to resolve as many disputes as possible to enable Nananom spend more time on development-related issues.

Currently, there are 34 chieftaincy cases pending before the Judicial Committee of the House of Chiefs. Among them are 19 petitions and 15 appeals. Six of the cases have so far been disposed of within the first quarter of the year.

Odeefuo Amoakwa Boadu VIII said the Judicial Committee is also working assiduously on the petitions affecting paramount stools and is determined to resolve all matters to reduce the list of vacant stools in the region.

He noted that the Judicial Committee is using Alternative Dispute Resolution (ADR) to expedite justice delivery to affected parties.

“We had 11 ADR cases within the quarter and six cases have so far been settled. We would take the opportunity to thank Nananom for their dedication and commitment in settling cases that are brought before this House,” he explained.

He promised to organize training workshops to build the capacity of Nananom in dispute resolution to enable them to contribute effectively to maintaining peace in the region.

He thanked the GNPC Foundation for assisting the House of Chiefs to renovate its office complex.

“I am pleased to inform you that with the support of the GNPC, the renovation of the House is progressing steadily. We are grateful to the Management of the GNPC for this kind gesture,” he added.