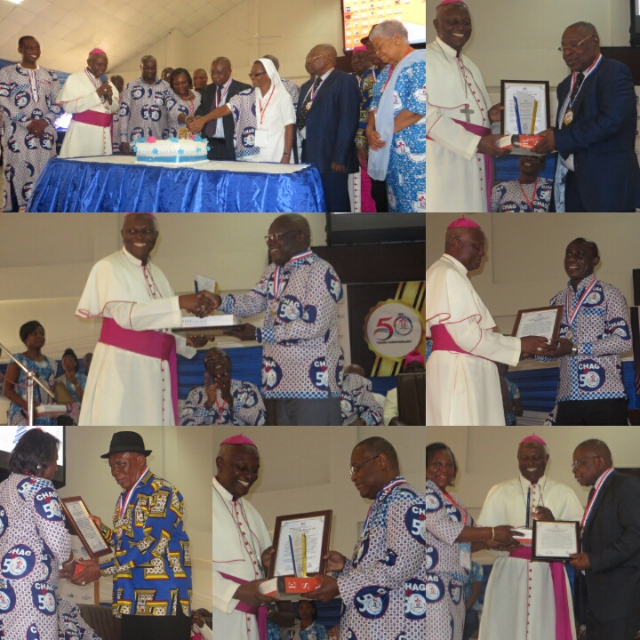 The Christian Health Association of Ghana (CHAG) has honoured the Health Minister, Kwaku Agyemang-Manu and five of his predecessors for their outstanding contributions towards healthcare delivery in Ghana.

The award forms part of the climax of CHAG’s golden jubilee celebration at the Pentecost Convention Centre, Millennium City at Kasoa in the Central Region.

The yearlong celebration was held under the theme: “50 Year of Christian Health Services; Lessons and Pointers for the next 50 Years”.

CHAG provides health care to the most vulnerable and underprivileged population groups in all 10 Regions of Ghana, particularly in the most remote areas.

Other awardees include past Executive Directors of CHAG, such as Dr Kwabena Adu-Poku, Monsignor Frank Cletus Egbi and Commander Godwin E. Osei (rtd).

Peter K. Yeboah, the Executive Director of CHAG, said the institution was dedicated to saving lives and livelihoods and promoting health and healing to millions of people; it becomes obligatory to celebrate achievements, recognize challenges and renew vows with joy and introspection.

He said CHAG was located in all the 10 Regions of Ghana, and in about 188 Districts and Municipalities of Ghana.

“In not too distant future, we will be in each District; hence One District, One CHAG Hospital shall become a reality,” he said.

“We are committed to providing holistic health services to the human person irrespective of socio-economic circumstances. Our Mission mainly is to promote Jesus Christ’s healing ministry,” he said.

He said in doing so, they seek partnerships with all stakeholders including government, development partners and the communities they serve.

“With sense of fulfilment and pride, CHAG has lived, and continue to pursue a timeless mission of service to humanity. We have served and saved millions of Ghanaians through our healthcare Facilities.

“With our Network of 302 Health Facilities, we handle, on average, 6 million Outpatient visits and 500,000 admissions annually in addition to receiving about 120,000 new births and safe deliveries every year,” Mr Yeboah added.

Mr Yeboah said: “So, as we appreciate, thank and trumpet the contributions of many people, institutions and organizations that have made CHAG what it is today, we are challenged to make our own contributions as CHAG leaps and journeys towards 100years and beyond.”

“So, in the next year 50 years, when future generations gather to celebrate CHAG’s Centenary Celebrations, how do we expect our names, contributions and legacies to be recognized?” he quizzed.

He said CHAG would for now need a refocused passion that reflects the needs of our clients; a renewed presence and visual identity to lead the national and international stage; and a rejuvenated purpose that would inspire our clients, their staff and the community to push for more.

“The future is bright.  CHAG is great and stronger than ever before, and ready to push the limits,” he said.

Mr Agyemang-Manu said: “Over the past 50 years, CHAG has made significant contributions towards the achievement of the national health objectives.”

He said importantly, in rural and deprived areas, CHAG has provided health services where hitherto the Government of Ghana had no facilities.

“To date, the services of CHAG complements that of the government in critical areas contributing 29 per cent of impatient care and about 20 per cent of outpatient care,” he said.

Dr Agatha A. Bonney, Board Chairperson, CHAG Board of Trustees, said they were showcasing CHAG’s contributions to the health sector over the past 50 years;  and they would not be complacent in the operations.

Mr Yieleh Chireh on behalf of his colleagues expressed gratitude to CHAG for the recognition of their contributions to the health sector.