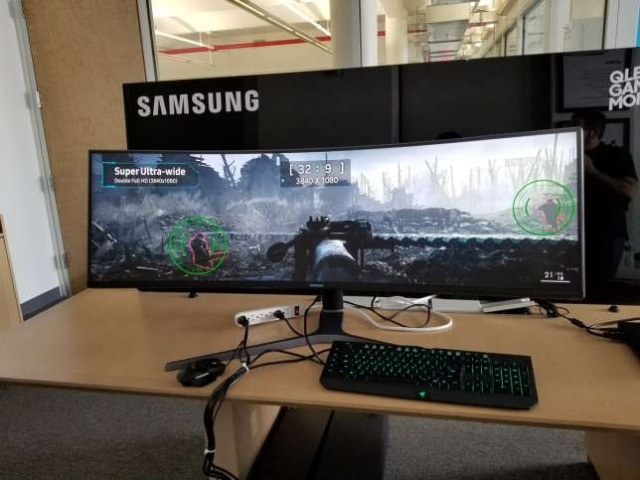 When I first tried an ultrawide monitor in 2016, I was hooked because of its applications in both gaming and productivity.

Ultrawide monitors are a relatively new category of monitors that are, indeed, wider than regular ones. But on Friday, Samsung introduced the CHG90, the first monitor in the new "super ultrawide" category, and it's outrageously wide.

The CHG90 is part of Samsung's gaming line of monitors that come with specs and features that gamers can appreciate, like quick response times and AMD's FreeSync 2 technology.

Check out the CHG90 and see for yourself how crazy this thing is:

Behold, the 49-inch CHG90 super ultrawide gaming monitor from Samsung. Samsung's marketing photo simply doesn't do justice to the CHG90's incredible super-ultra-width, so here it is displaying an Excel spreadsheet to help put it into perspective.

It's curved, which helps keep the CHG90's outer edges in your peripheral vision. Without the curve, you'd probably be turning your head constantly, which could get uncomfortable after a while.

Apart from the advantage of the extra field of view, its width and curves look as if they could suck you in for immersive gameplay.

Here are some of the CHG90's important specs and features:

The CHG90 uses a VA LCD panel, which is an ultrafast panel with a response time of only one millisecond. That might not mean much to someone who mostly uses computers for work, but gamers who play fast-paced games could appreciate the CHG90's minimal response time.

• It has a refresh rate of 144 hertz, which means each pixel can refresh 144 times per second, and makes for high-frame-rate gaming — if your graphics card can handle high frame rates.

• It also features HDR10 for even better colors and contrast.

• It's the first monitor to feature AMD's FreeSync 2 technology, which helps your PC's graphics card communicate with the monitor for smoother gameplay without screen tearing or stuttering.

You can split up the layout of the screen with the CHG90's software, as Windows 10 doesn't have any settings or support for such a wide screen.

You can preorder the CHG90 monitor on Amazon and at local Micro Center stores.