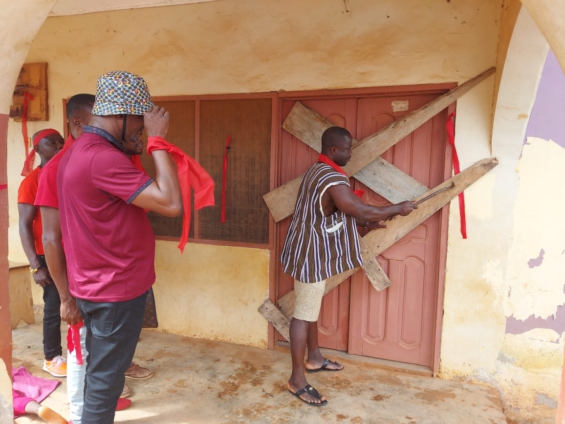 The traditional council of Pakyi Number 1 and 2 close to Kumasi today led an exercise to lock up local revenue collection offices in the area to protest what they describe as government neglect of the area.

Deplorable roads leading to the community centre, lack of toilet facilities at the market and overflowing refuse dump sites are key developmental issues that triggered the protest.

A sub-chief of Pakyi Number two, Nana Agyenim Boateng says the government has continuously failed to honour its numerous promises to them.

In the quest to get their challenges addressed, the local authorities locked up the local revenue office located at Pakyi-2.

They nailed wooden slabs behind the doors and tied red cloths to the premises to register their displeasure against the Amansie West District Assembly.

“Are we not citizens? We are not opening until something is done,” said one of the chiefs.

They say the barricades would not be removed until their grievances have been addressed. The poor nature of roads in the area is affecting productivity and economic prospects.

Poor sanitary conditions have impacted negatively on market activities.
This heap of refuse close to the market has become a headache to traders.

The market Queen, Fatima Antwiwaa, bemoaned the strong stench and flies it brings to the market. A resident, Frank attributes his daughter’s regular ailment to the filth.

Assembly member for the Area, Alex Donkor, says efforts to get their grievances resolved by the assembly have yielded no results.

“We will be staging another protest if the assembly does not heed to our grievances,” he said.