Child mortality in Obuasi improves due to NICU establishment 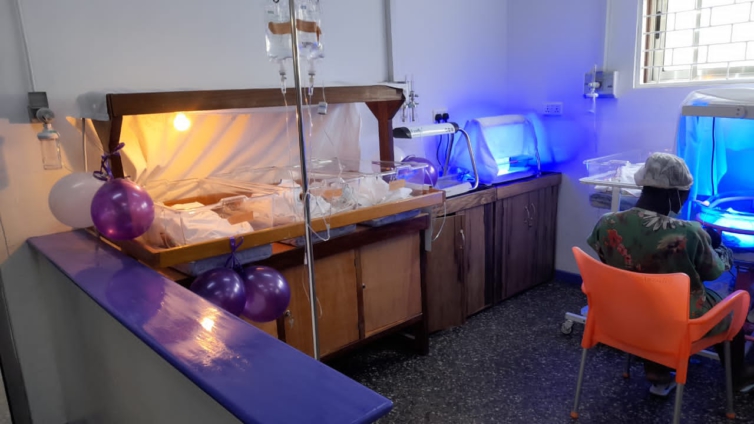 Child mortality cases have improved in the Obuasi municipality following the establishment of a Neonatal Intensive Care Unit at the Anglogold Ashanti Health Foundation (AGAHF).

Statistics show that out of 116 children born preterm this year, 93 of them were successfully discharged and only six of them were referred to the Komfo Anokye Teaching Hospital.

The admission of children born premature has witnessed 120% increase.

Executive Director of AGAHF, Dr. Kojo Anim says the establishment of the unit has improved services rendered to patients by the AGAHF.

“Prior to this year, we had to refer all prematurity cases to KATH and that didn’t only have a toll on the mothers, but the children. The NICU has been able to stem down referrals to Kumasi especially on prematurity and new born cases”, he said.

He added, “We are currently getting cases from Dunkwa, New Edubiase and as far as Assin Fosu. There are occasions that KATH will call and inform us of referrals coming beyond Obuasi and will tell us to take it if we have the space”.

Dr. Anim spoke at an event to officially commission the Neonatal Intensive Care Unit which coincided with World Prematurity Day under the theme, “Zero Separation”.

The facility, constructed by Anglogold Ashanti at the cost of GH660,000, is the first Neonatal Intensive Care Unit in Obuasi.

In Ghana, it is estimated that 128,000 babies are born premature annually and 8,400 of these die before age five due to direct complications of prematurity.

Nonetheless, the facility is seeking more equipment to improve services.

“There are still some cases that we may have to refer to KATH. If we are able to get some equipment like ventilators we are sure that sending cases to KATH will be on a much lower side”, Dr. Anim added.

Senior Manager for Sustainability at Anglogold Ashanti, Emmanuel Baidoo, says the establishment of the facility at the AGA Health Foundation aligns with AGA’s vision of establishing AGAHF as a teaching hospital which is captured in their 10 year socio-economic Development Plan.

He said AGAHF has over the years remained a formidable force in consistently providing quality healthcare to the people in and around Obuasi.

The Obuasi East District Health Director, Delphine Gbogblorvor, said the establishment of the NICU was timely especially when families of preterm babies had torrid time accessing quality healthcare at nearby hospitals.

The AGA Health Foundation formerly known as Edwin Cade Hospital and AGC Hospital was built in 1930 to provide quality health care to workers, their wards and people in and around the catchment of the mine.

In 2015, following the restructuring of AGA, the then Obuasi Mine Hospital was incorporated as a non-profit organisation called AGA Health Foundation.

DISCLAIMER: The Views, Comments, Opinions, Contributions and Statements made by Readers and Contributors on this platform do not necessarily represent the views or policy of Multimedia Group Limited.
Tags:
Anglogold Ashanti
Anglogold Ashanti Health Foundation (AGAHF)
Child mortality