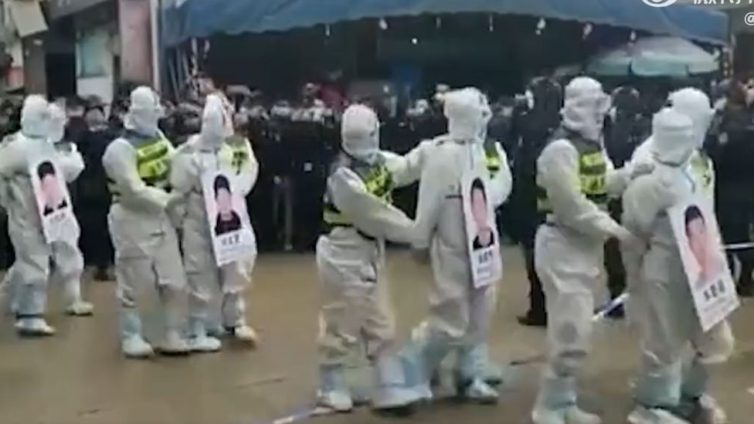 Police in southern China have been captured on camera parading four alleged offenders through the streets in a public shaming exercise.

The four men were accused of smuggling people across China’s borders, which are largely sealed because of Covid.

They were paraded through the streets of Jingxi city in Guangxi province in hazmat suits.

The shaming drew mixed reactions online, including in state-owned media.

Images and video of the incident, which took place on 28 December, show four men in hazmat suits and face shields being walked through an area of the city by police.

They were carrying placards displaying their names and photos. Some people could be seen watching the event unfold.

State media have described the current Covid situation in the border area as “severe and complex”.

The shaming parade met with a mixed reception on social media site Weibo where a hashtag about the public shaming was the top trending topic.

Some people said the exercise reminded them of public shamings from hundreds of years ago, while others empathised with the efforts needed to control the virus near the border.

“What is more terrifying than parading the street is the many comments that support this approach,” one user wrote.

The State-owned Beijing News said that “the measure seriously violates the spirit of the rule of law and cannot be allowed to happen again”.

The Jingxi City Public Security Bureau and local government defended the exercise, however, claiming it was an “on-site disciplinary warning activity” and that there was no “inappropriateness”, according to local media.

In 2007, a notice from authorities in China banned the parading of prisoners who had been given the death penalty.

Public shamings were common during the cultural revolution and are fairly rare now. In 2006, about 100 sex workers and some of their clients were dressed in yellow prison tunics and paraded through the streets.