We frequently talk about the gender gap in science, technology, engineering, and math (STEM) fields, and why getting more girls in technology is important. But that isn’t the only gap that desperately needs to be filled if we are to achieve a workforce that reflects the perspectives, insights, and talents of our population. Like women, people of color are largely underrepresented in STEM fields, and the circumstances that impact these numbers start way before college and job searches.

According to the White House, “Members of racial and ethnic minority groups are projected to become the majority of America’s population in the next 30 years. Today, however, they account for just 28 percent of America’s STEM workers.” We need the contributions of these groups, so 28 percent is just not enough.

Despite underrepresentation, black innovators have made countless discoveries that have defined current STEM fields. In honor of Black History Month, we wanted to highlight some of the individuals past and present who should be remembered for their achievements. Say hello to a new list of potential role models for your aspiring engineer, designer, or programmer.

When Alan Emtage worked as a systems administrator for the School of Computer Science at McGill University, he decided to create a program that would automate the time-consuming process of finding software for teachers and students. He named the program “Archie,” as a derivative of the word “archive” (without the “v”). Developed in 1990, his program was the world’s first engine, or what Emtage calls the “great great grandfather of Google and all those other search engines.”

Unfortunately, people weren’t making money off of the internet at that time, so Emtage didn’t think to patent his useful program. Still, knowing that he was the first is pretty cool. 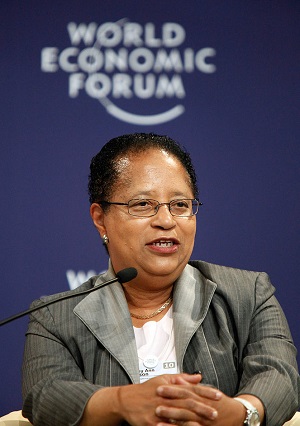 Shirley Ann Jackson speaks at the Annual Meeting of the Champions in 2010. Image courtesy of World Economic Forum.

In short, Jackson is extraordinarily intelligent and not afraid to break down barriers of any kind.

Once known as the Bill Gates of Ghana, Herman Chinery-Hesse is responsible for bootstrapping theSOFTtribe in 1991 with no start-up capital and only his personal computer. Despite its humble beginnings, theSOFTtribe quickly became one of the biggest tech companies in Ghana, offering avariety of software services such as payroll management, airline ticketing and booking, and much more.

According to Chinery-Hesse, technology can provide a better future: “Technology is the only way for Africa to get rich. We don’t have proper infrastructure and we can’t compete in manufacturing. But if you put me behind a PC and tell me to write software for a Chinese customer, then I can compete brain for brain with anyone trying to do the same thing in the US.”

Mark Dean joined IBM in 1980 as an engineer while he worked to receive his Master’s Degree in Electrical Engineering from Florida Atlantic University. He quickly became a major player at IBM, eventually holding three of the company’s nine original patents. In addition to working as chief engineer for the team that developed the original home computer, he also worked closely with Dennis Moeller to develop the Industry Standard Architecture (ISA) systems bus which allowed other devices to connect to a PC.

Most people would have given themselves a pat on the back after that kind of success, but Dean went on to get his PhD in Electrical Engineering from Stanford. He’s also responsible for developing the color PC monitor and first gigahertz chip. 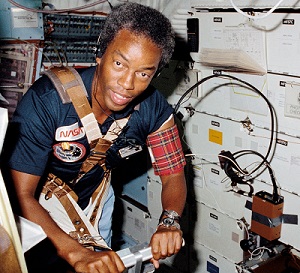 Guion Bluford Jr. on the STS-8 in 1983. Image courtesy of Wikipedia.

After training at Williams Air Force Base, Guion “Guy” Bluford Jr. flew 144 combat missions during the Vietnam War. From there, he got his master’s degree and PhD and set his sights on NASA. Not only was Guion Bluford Jr. the first African American man to travel into space, but he went up giggling—literally. From 1983 to 1992, Bluford made four trips to space, working as a mission specialist on theChallenger and then on the Discovery. In 1997, he was inducted into the United States Astronaut Hall of Fame.

Kimberly Bryant had worked for years as asuccessful electrical engineer before moving to the Bay Area. Once she made it to the heart of Silicon Valley, she noticed that minorities were severely underrepresented in the startup world. Coupled with the fact that her daughter, Kia, was sick of instructors focusing more on the boys (who outnumbered the handful of girls) at a programming camp, she knew she had to do something about it.

In 2011, Bryant decided to create Black Girls Code, a nonprofit that empowers girls from underrepresented communities by introducing them to programming. While not as lucrative as her previous jobs, the positive influence from her nonprofit organization has already made an impact: girls who have participated in Black Girls Code have started clubs and are becoming leaders in their communities.

While it’s impossible to go into the many research and development programs Earls has been a part of (we’ll at least mention aeronautical propulsion and microgravity sciences), he’s no doubt been an integral part of NASA’s team.

In 2010, Fast Company named Angela Benton one of their Most Influential Women in Technology. And it’s not hard to see why. Three years prior, she had co-founded Black Web 2.0, now called B20, to highlight the exceptional innovation and talent “of Blacks in the technology and new media industries.” After working as a web designer, creative director, and front end web developer, Benton took on an entirely new challenge in 2011: creating NewME, a platform that helps minority and women entrepreneurs create successful businesses. The online platform has helped entrepreneurs raise more than $20+MM in venture capital funding. 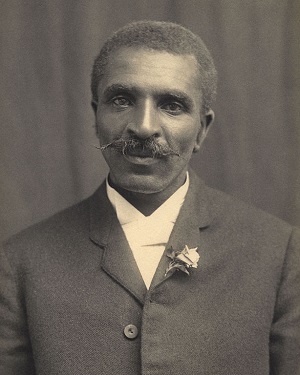 Though he was born a slave, George Washington Carver became one of the most highly regarded botanists of his day. He completed his botanical studies degree at Iowa State Agricultural College, and was then hired to run Tuskegee Institute’s agricultural department.

Carver quickly gained international attention for his work. He taught revolutionary crop rotation methods, developed a mobile classroom that allowed him to teach farmers on-site, researched new uses for existing crops, and supported replacing expensive commodities with less expensive crops. Much of this research focused on peanuts. In fact, Carver uncovered more than 100 uses for peanuts, which he used when testifying to Congress in favor of a tariff on imported peanuts.

Carver’s groundbreaking work had a huge impact on current crop-growing techniques and positively influenced many black farmers, who were still learning to navigate their new role as freemen post-Civil War. He was made a member of the Royal Society of Arts and consulted with Theodore Roosevelt and Mahatma Gandhi regarding agricultural matters.

In 1992, Mae Jemison boarded the Endeavour and was thrust into orbit, becoming the first African American woman in space. But she hadn’t always set her sights on space. In 1977, Jemison received a Bachelor of Science in chemical engineering from Stanford. From there, she went to Cornell University Medical College and got her M.D., eventually working as a Peace Corps medical officer while teaching and completing medical research.

Only then did Jemison apply to NASA’s astronaut training program, becoming one of just 15 candidates from a pool of more than 2,000 people who applied. She holds nine honorary doctorates in science and is a dancer.

As one of the “first black technologists,” Frank Greene expanded the notion of who could innovate in the tech space. While serving in the U.S. Air Force as an Electronics Officer, Green developed high-performance computers for the NSA. He then began working for Fairchild Semiconductor, where he helped develop the patented memory chip design. He holds the patent for the integrated circuit that helped the company become a reckoning force in the semiconductor space.

Over the course of his life, Greene taught electrical engineering and computer science for five universities. He founded multiple companies and was one of just a few dozen people to be inducted into Silicon Valley Engineering Hall of Fame.

Ericsson-Jackson still works as an aerospace engineer at NASA as an instrument manager for aproposed mission to bring dust from the Martian lower atmosphere back to Earth.

Countless lives have been saved thanks to Vivien Thomas’s research. After graduating from high school with honors, Thomas’s dreams to attend college were cut short when he lost his tuition money following stock market crash in 1929. Instead, he began working as a lab tech at Vanderbilt’s medical school under Alfred Blalock. There he became an invaluable worker, with his research changing the way people thought about traumatic shock.

In 1941, Blalock became the chief surgeon at Johns Hopkins University and he brought Thomas along with him. Together, they developed an operation to that helped babies with Tetralogy of Fallot or blue baby syndrome by increasing the amount of oxygen in the blood and reducing constriction. Thomas contributed greatly to the operation techniques, and in conjunction with Blalock and cardiologist Helen Taussig, his work helped create the Blalock-Taussig shunt. In fact, without the techniques of this heart surgery pioneer, babies with this condition might still face high mortality rates.

HBO made a film inspired by Thomas’s story in 2004 featuring actors Alan Rickman and Mos Def. Watch a trailer for the film, called Something the Lord Made here:

Marie Daly helped us understand how the body works. Growing up, her family pushed her to succeed in school. Daly received degrees in STEM subjects from Queens College and New York University. She then went to Columbia to complete her doctorate degree, becoming the first African American woman in the country to get a PhD in chemistry.

After graduating, Daly began researching the connection between high cholesterol and clogged arteries.Her innovative findings helped start a conversation within the medical community about how a person’s diet can affect heart health and the circulatory system. Daly was also an activist who dedicated much of her time to supporting students of color in STEM fields. She even created a scholarship fund in memory of her dad.

Oyekunle Ayinde (Kunle) Olukotun is a pioneer of the multi-core processor. In 2000, he founded Afara Websystems, a company that created multi-core SPARC-based computer processors for data centers. His business was then acquired by Sun Microsystems, becoming an integral part of its throughput computing system and one of the fastest ramping products ever.

Olukotun founded the Pervasive Parallelism Lab (PPL) at Stanford University, which is hoping to make iteasier to write software for multi-core chips. He also leads the Stanford Hydra research project, which “developed one of the first chip multiprocessors with support for thread-level speculation (TLS).” If all of that research material seems a bit above you, you’re in the same boat as me—but that’s what makes Olukotun’s innovations so important.

Making a Change Starts With You

While this list highlights some of the black STEM leaders who made impactful innovations to the science, technology, engineering and mathematics fields, it is by no means an exhaustive list of the numerable accomplishments of black innovators. For more reading, I’d recommend this list of black women game changers in STEM, this website on black inventors, or the History Makers.