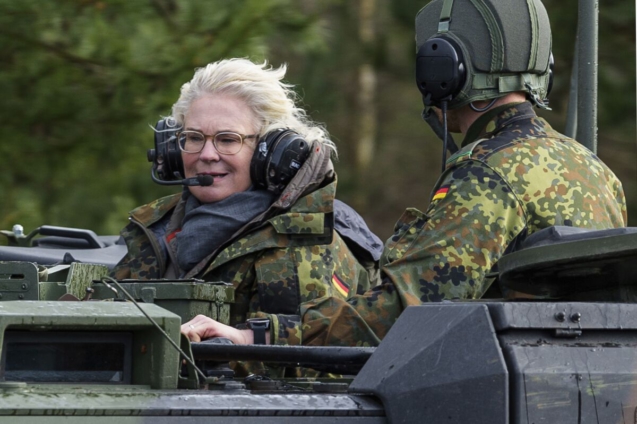 It comes as Berlin comes under rising pressure to allow the delivery of German-built battle tanks to Ukraine.

Ms Lambrecht was mocked for her announcement that Germany was supporting Ukraine by sending 5,000 military helmets.

This was despite the provision of €100bn (£88bn) for that task following Russia’s invasion of Ukraine.

Ms Lambrecht, a member of Chancellor Olaf Scholz’s Social Democrats (SPD), also came in for criticism when it emerged that she had taken her son on a trip in a military helicopter.

But it was an awkward video she posted on New Year’s Eve which triggered widespread contempt and undermined her support within political circles. In the video, Ms Lambrecht talked about the positive personal encounters she had enjoyed during the war in Ukraine, while fireworks exploded around her in Berlin.

In a resignation statement seen by the German national news agency, Ms Lambrecht said: “Months of media focus on me doesn’t allow for fact-based reporting and discussion about soldiers, the army and security policy in the interest of German citizens.

“The valuable work of the soldiers and many motivated people in the defence area needs to be in the foreground.”

Ms Lambrecht was due to meet other defence ministers from Ukraine’s western allies at the American military base in Ramstein on Friday to discuss further support for Ukraine.

The German government is facing renewed calls to send German-built Leopard 2 tanks – which Ukraine considers vital if it is to defeat Russia – or at least approve their delivery from countries such as Poland.

Warsaw has signalled its intention to supply the battle tanks, but requires permission from the country of manufacture.

Chancellor Olaf Scholz, who has been criticised for his cautious approach to sending heavy weaponry to Ukraine, agreed last week to supply Marder infantry fighting vehicles.

Crucially, that decision was reached with the US, which jointly announced it would send Bradley armoured vehicles.

A senior government source told me that Berlin will only send Leopards if the US is in agreement. And the head of German arms manufacturer Rheinmetall has warned that, even if that decision was reached, it would be 2024 before it could deliver the tanks.

But German Vice Chancellor Robert Habeck said recently that his country would not stand in the way of other nations that wanted to send Leopards.

It is not yet clear who will succeed Ms Lambrecht in a job which is considered such a poisoned chalice that many refer to it as “the ejector seat”.

DISCLAIMER: The Views, Comments, Opinions, Contributions and Statements made by Readers and Contributors on this platform do not necessarily represent the views or policy of Multimedia Group Limited.
Tags:
Christine Lambrecht
Germany's defense minister
Ukraine criticism